How Africa’s most powerful warship became a floating wreck 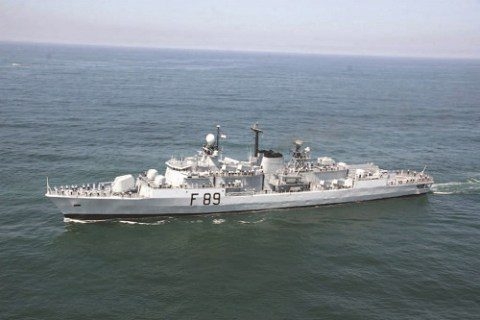 In Africa today, only a handful of countries have a true blue water navy. These countries can count on their naval forces to conduct maritime operations far from their shores.

These fortunate countries are Egypt, Algeria and South Africa, maybe even Morocco.

The importance of owning a true blue water navy cannot be over-emphasized. From power projection far from home to fishery protection near the coastline.

These are the roles of a country’s navy. However, an integral component of this role is operating modern surface combatants capable of meeting and exceeding the security needs of a country.

One of such modern surface combatant is the NNS Aradu (F89), a Meko 360 class multipurpose frigate. The Aradu (Hausa for “Thunder”) can be easily identified as the most heavily-armed warship in service with any African nation.

The NNS Aradu given its heavy firepower and armaments was truly a unique ship, often classified as a destroyer. Africa’s first multipurpose destroyer capable of simultaneous anti-air, anti-surface and anti-submarine warfare.

Based on the Blohm & Voss MEKO 360 design pattern, although, specifically designated by the manufacturer as MEKO 360H1.

NNS Aradu started her life as ‘The Republic’, laid down at the Blohm Voss shipyard in Hamburg on December 1, 1978, and launched on January 25, 1980, two years later.

She was to spearhead Africa’s most powerful fleet at that time, comprising of a smaller, older frigate, the NNS Obuma, four corvettes of the Dorina and Erin’mi classes and six missile boats – three Ekpe class of German design and three Siri class of French design.

In addition to these vessels, there was a capable force of minesweepers, seaward defence boats and patrol craft.

On a national level, the protection of Nigeria’s 856km coastline as well as various oil and gas installations dotting the landscape was paramount.

To fulfill this monumental tasks, NNS Aradu was armed to the teeth. Aradu’s main gun is an OTO Melara Compact 127 mm/L54 dual-purpose gun. It fires 31 kg projectiles at up to 40 rounds/minute, out to a maximum range of 23,130 m and an anti-aircraft ceiling of 7 000 m. Capable of engaging ships, land targets, aircraft, and even some anti-ship missiles.

At that time, it was one of the most capable dual-purpose guns in the world.

For air defense, it was armed with four Breda “Twin Fast Forty” CIWS turrets, each with two Bofors 40 mm/L70 automatic cannons, with one mounted at the four corners of the ship.

These anti-aircraft guns was so devastating that it is capable of destroying a supersonic cruise missile at up to three kilometers.

To complement the anti-aircraft guns, an Albatross surface to air missile system was mounted. The Albatross SAM is a variant of the United States Raytheon RIM-7 Sea Sparrow.

The Albatross is a 230 kg semi-active radar homing missile with a 33 kg continuous rod warhead, and has an effective range of 18.5 km (10 nm). Thirty-two Albatross was usually carried.

In case of a squabble with enemy ships, the NNS Aradu was armed with eight Otomat Mk 1 anti-ship missiles.

The Otomat Mk 1 is a short-range subsonic anti-ship missile developed by the Italian company Oto Melara jointly with Matra. It is capable of reaching around 180 kilometres at an average speed of 1,100 kilometres per hour.

Other equipment and weapons carried includes a 6 x 324 mm torpedoes and a depth charge rack. Both were for anti-submarine warfare.   An ECM suite is fitted, with a Decca RDL-2 ESM system, and two chaff mortars.

A Lynx helicopter was usually carried onboard the ship during operations.

NNS Aradu: The pride of the nation

In 2005, NNS Aradu brought glory to Nigeria when it participated in the commemoration of the 200th anniversary of the Battle of Trafalgar by sailing to Great Britain. NNS ARADU also took part in “Operation Seadog” in 1985 and “Operation Odion” in 1987.

During her prime, she undertook extensive diplomatic visits to countries like Gabon, Congo, Zaire, Equatorial Guinea and numerous European countries.

She has also participated in joint exercises with visiting ships of the German, Indian, French and the Brazilian Navies.

The fall of NNS Aradu

Although, the Nigerian navy was arguably the best equipped surface fleet in sub-Saharan Africa.

However, training and maintenance culture plummeted compounded by financial problems brought about by the falling oil prices.

More so, corruption and negligence at the leadership level didn’t help matters.

The current state of NNS Aradu

At this moment, NNS Aradu, is sitting at the naval Dockyard limited in Victoria Island, Lagos. The same ship acquired, almost at the same time, by Argentina are still functional while the pride of Nigerian Navy and flagship of Nigeria is in the doldrums.

“We desire to have the ship at sea but as soon as the navy is properly funded, we should be able to refit that vessel and have it at sea,” he said.

Vice Adm. Ibok-Ette Ibas later revealed that refitting NNS ARADU was not an option for now.

Although, the Nigerian Navy may have lost the remarkable capabilities of the NNS Aradu however, not all is lost.

With the trend in recent naval acquisitions moving towards smaller littoral vessels, it appears that the Nigerian Navy is foregoing its traditional power projection capability for regional security and Defence.

These two Chinese OPVs, alongside the two Hamilton class vessels represent the most potent surface assets available to the Nigerian Navy.

Fortunately, Nigeria faces little or no conventional military threat from any of its neighbours and while the prestige of having missile frigates like the NNS Aradu and a force of missile boats is undoubtedly attractive however, coastal security is more important.

The Nigerian Navy is slowly inching its way back to being a viable force capable of performing critical missions in respect of EEZ surveillance and patrol.

This makes perfect sense because most of Nigeria’s revenue comes from the oil and gas sector, a lot are based offshore.

To further protect it’s Economic Exclusive Zone (EEZ), Nigeria is planning on procuring a wide variety of naval vessels in the short and medium term including a general-purpose frigate valued at $350 million, a long-endurance Offshore Patrol Vessel (OPV) valued at $120 million, a medium-endurance OPV estimated at $60 million, a landing platform dock (LPD) ship worth $350 million and a landing ship-tank valued $90 million.

Also, other assets earmarked for long-term procurement includes a submarine worth $300 million, a Seaward Defence Boat (SDB) worth $10 million and a specialised naval security helicopter at an estimated cost of $25 million.

Besides these, since the security of our neighbours Benin, Togo, Cameroon, Sao Tome and Principe and Equatorial Guinea in particular, largely depend on the Nigerian Navy, it is hoped that these lofty acquisition will not fall the same way NNS Aradu fell.