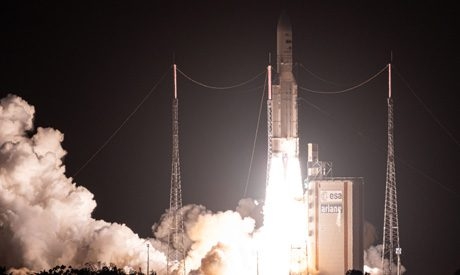 European launch provider Arianespace has launch the Tiba-1 communications satellite for Egypt on Tuesday 26, 2019, in order to improve communications in Egypt.

The deal for the satellite was signed in 2014 by the Egyptian President and the then French President, Francois Hollande as part of an arms agreement, reported being worth about USD 1.2 billion.

The satellite, named TIBA-1 after Thebes or Tiba in Arabic, an ancient Egyptian capital was developed by Airbus and Thales Alenia Space (TAS).

TIBA-1 left the Airbus Defence and Space facility in Toulouse to French Guiana on 25 November, where it was prepared for launching into orbit from Kourou on an Ariane 5 rocket, according to a release by Airbus Space.

It is Egypt’s first government-owned telecommunications satellite. TIBA-1 was supposed to be launched last Friday, but was postponed due to a malfunction in the power supply to the launching platform.

It was due to be launched on Monday but then was postponed for a further 24 hours.

“What a journey that we have done together,” Arianespace CEO Stephane Israel said after the launch.

“The Satellite will provide Egypt with a parallel communications network alongside the current land network and a strong telecommunications infrastructure,”

TIBA-1 will be operated by the Egyptian Space Agency from its control center in Cairo.