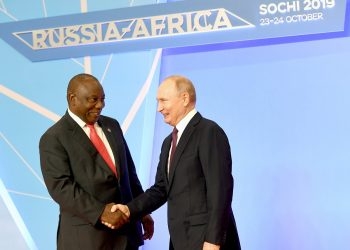 On the sidelines of the recently concluded Russia-Africa Summit, Russia and South Africa plan to work together to develop and manufacture weapons and military equipment.

According to the Director of the Russian Federal Service for Military-Technical Cooperation Dmitry Shugayev, South Africa had the most developed military-industrial complex in Africa, and Russia was interested in cooperating with it.

“There are some promising cooperation projects related to the joint development and manufacture of weapons and military equipment both for our countries’ national armed forces and in the interests of third countries,” he told reporters.

As Russia is trying to catch up with other major partners in Africa, like China and the United States.

Although, according to a report by SIPRI, Russian arms exports had dropped 17 percent between 2014-2018 when compared to 2009-2013, contributing to a widening gap with U.S. exports.

In 2018, Russia surpassed the United Kingdom to become the world’s second-largest arms producer.

For African standard, South Africa possess a potent array of modern indigenous military technologies that can deliver a heavyweight of firepower when required.

However, despite this remarkable stride, prolonged funding cuts to the SANDF budget has severely hampered equipment procurement, resulting in capability gaps across all domains.

Thus, a collaboration with Russia could provide the much needed resources to keep its defence industries afloat.