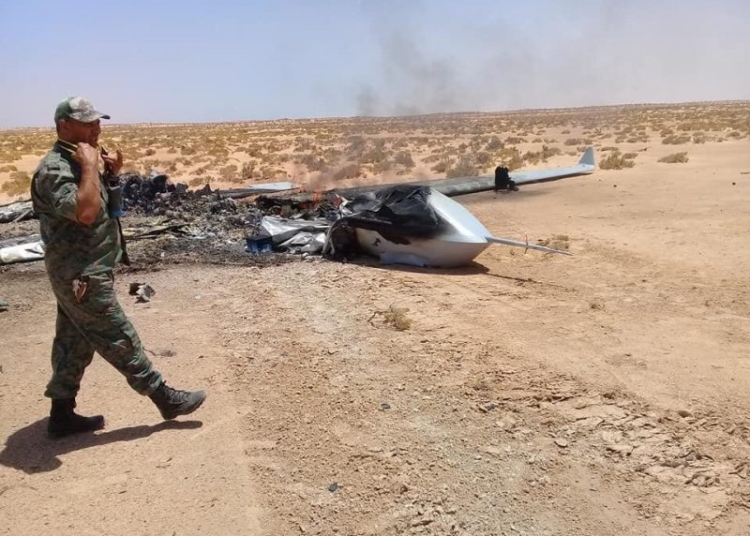 Few days after two Aeronautics Orbiter-3 Small Tactical UAS belonging to the forces allied with the Government of National Accord was shot down by the Libyan National Army, a Wing Loong II Unmanned Combat Aerial Vehicle (UCAV) has also been shot down.

GNA sources disclosed that the Wing Loong II UCAV was attempting to conduct airstrikes on behalf of the LNA near Misrata, Libya on 3 August morning.

The Wing Loong II UCAV is a Medium-Altitude Long-Endurance (MALE) Unmanned aerial vehicle, an improved version of the Wing Loong UAV. It is designed by the Aviation Industry Corporation of China (AVIC).

With an endurance of 20 hours, the Wing Loong II can provide accurate surveillance and ground attack capabilities for over 4,000 kilometres with a lethal load of 200 kg of sensors and weapons.

Western defence experts are of the opinion that the Chinese Wing Loong II UCAV are essentially replicas of the American Predator drone. The Wing Loong II can fire the AR-1, BA-7, AR-2 and AKD-10 precision-guided missile, a Chinese equivalent to the American Hellfire air-to-ground missile.

China has sold several of these types of drones to states across Africa and the Middle East which has directly contributed to the proliferation of these unmanned weapons.

The United Arab Emirates (UAE) has notably used Wing Loongs in the controversial Saudi-led air campaign against the Houthis in Yemen, as well airstrikes in support of General Khalifa Haftar’s ongoing siege of Libya’s capital Tripoli. In violation of the UN arms embargo on Libya.

As a result of the GNA’s highly effective drone operations, a Russian-made Pantsir-S1 air defence system was purportedly supplied to LNA forces by the United Arab Emirate. In June 2019, photographs of a Pantsir S1 air defence systems was published on social media. However, the whereabout of the Pantsir-S1 system is still unknown.

It is believed that UAE supplied this air defence system in order to counter the Turkish-made Bayrakta TB2 unmanned aerial vehicles (UAVs), which the forces of the GNA have been used against LNA forces during its recent offensive to capture Tripoli.

During the defence of Tripoli, the GNA recovered a Russian made Orlan-10 Unmanned Aerial Vehicle (UAV) which was shot down on 30 April.

Also, following the offensive launched by the LNA to seize the capital on April 4, several weapons were looted including SA-7 MANPAD. Previously, the Libyan National Army (LNA) acquired the Iranian made Ghods Mohajer-2 UAV. Pictures of the UAV was taken in an unidentified military base in Libya.

Satellite image by DigitalGlobe images taken from 3 August 2018 confirms that the United Arab Emirates has deployed at least one of its Wing Loong II unmanned aerial vehicles (UAVs) to its base at Assab airport in Eritrea.

While the Egyptian Ministry of Defense (MOD) released photos and videos of the Egyptian Air Force Wing Loong-1 UCAV armed with a pair of Blue Arrow 7 laser-guided missiles. The Egyptian Air Force and China’s National Aero-Technology Import and Export Corporation (CATIC) has signed a comprehensive agreement to order an unspecified number of Unmanned Aerial Vehicles (UAV) likely to be the Wing Loong II attack-reconnaissance UAV.