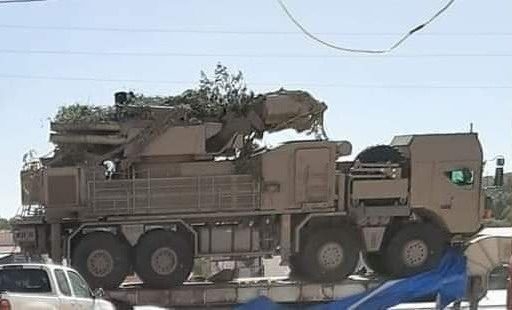 The Russian-made Pantsir-S1 air defence system that has purportedly been supplied to forces fighting in Libya. Images of a Pantsir S1 air defence systems was published on social media channels on 18 June by forces allied with Commander Khalifa Hafter’s Libyan National Accord (LNA).

In the photograph, the Pantsir S1 was seen being carried by a transporter in photographs purportedly taken at Jafra Air Base and the town of Gharyan under armed escort by LNA units.

The Pantsir-S1 air defence systems could be seen mounted on a MAN SX45 8×8 truck is similar to the configuration acquired by the United Arab Emirates (UAE).

It is believed that UAE supplied this air defence system in order to counter the Turkish-made Bayrakta TB2 unmanned aerial vehicles (UAVs), which the forces of the GNA have been used against LNA forces during its recent offensive to capture Tripoli.

For a long time now, the United Arab Emirates and Egypt have provided the LNA with military equipment, which initially helped General Khalifa Haftar to gain the upper hand in Libya’s eight-year conflict.

According to information on the manufacturer’s website, the Pantsir-S1 system (SA-22 ‘Greyhound’) was designed by the KBP Instrument Design Bureau of Tula, Russia, and is manufactured by the Ulyanovsk Mechanical Plant in Ulyanovsk. It combines two 2A38M 30 mm automatic anti-aircraft guns developed from the two-barrelled 30 mm GSh-30 gun, with twelve 57E6 surface-to-air missiles.