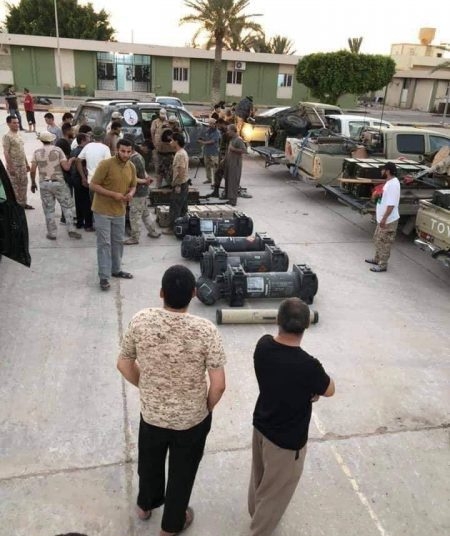 After the forces loyal to the UN-backed Libyan Government of National Accord (GNA) entered the city of Garyan to the south of Tripoli a few days ago in a bloody offensive, a large cache of sophisticated weapons was retrieved.

Since early April, the Libyan National Army (LNA) has been engaged in an offensive to gain control of Tripoli. The city of Garyan, located on the strategic highway to the Libyan capital Tripoli and the main forward base for the LNA where troops, weapons and ammunition arrived from the East.

Since then, the Government of National Accord (GNA) has been waging a counteroffensive (code-named: Volcano of Rage) to prevent the LNA from completely capturing Garyan as well as Tripoli.

In a surprise attack, GNA forces allied to the Tripoli government, backed by air strikes, stormed the town, some 90 km (56 miles) south of Tripoli.

The ADCOM Yahbon drone is usually used as aerial training targets, for air defence drills, however, the Yabhon drones captured in Garyan were missing key parts and are in poor condition, which might suggest that perhaps, Haftar’s forces intended to use them as makeshift guided missiles

The M79 Osa (“wasp”) is a Yugoslav-made portable 90 mm anti-tank weapon made of fibre-reinforced plastics.

The FGM-148 Javelin is a U.S. made man-portable fire-and-forget anti-tank missile, it uses automatic infrared guidance that allows the user to seek cover immediately after launch, as opposed to wired-guided systems.

The Javelin’s High Explosive Anti-Tank (HEAT) warhead is capable of defeating modern tanks in a top-attack mode. It is also useful against fortifications in a direct attack flight. As of January 2019, over 5,000 Javelin missiles have been fired in combat.