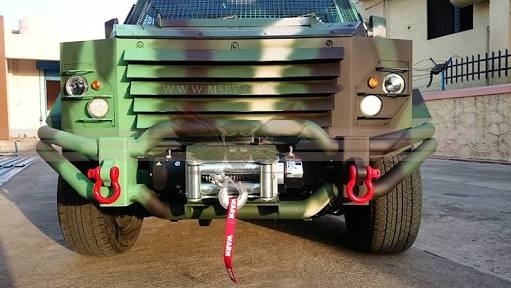 The Cameroonian military has taken delivery of an unspecified number of the  Panthera T6 armoured personnel carriers (APCs).

According to photographs posted on social media in September, two new vehicles acquired from Minerva Special Purpose Vehicles (MSPV), were being unloaded from shipping containers under the supervision of BIR officers, the Panthera T6s could be seen fitted with a protected weapons cupola.

The new Panthera T6 APCs would be used by the country’s elite Rapid Intervention Battalions (BIR) for use in counter-insurgency deployment in urban areas of the southwest and northwest region, (Operation ‘Chacal’ (Jackal)).

The vehicle was designed to provide high levels of ballistic and blast protection, It was first unveiled at the DEFEXPO 2016 held in Goa, India, in March 2016.

The new vehicle is suited for military and homeland security missions such as patrol, convoy protection, troop transport, law enforcement and peacekeeping.