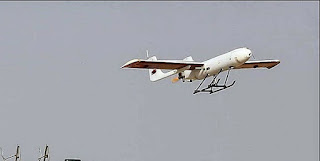 Images released by Maghreb Confidentiel an online news media indicates that the Libyan National Army (LNA) has acquired the Iranian made Ghods Mohajer-2 UAV. The pictures was taken in an unidentified military base in Libya.

Three countries operate this type of drone: Iran,  Venezuela and Sudan so the most likely source would be either Iran or Sudan. The Sudanese military operated a large fleet of UAVs mostly from Iran the Mohajer-2 has been in its service since 2008 more than nine years ago.

The Mohajer-2 usually referred to as the M-2 was showcased at the International Iran Kish airshowin Iran on November 2014. It means ‘Migrant’ in English. Mostly used for Intelligence, Surveillance and Reconnaissance (ISR)  artillery spotting and can also be used for Search and Rescue (SAR) operations.

It features a roundish cylindrical fuselage, twin-boom tails, and straight wings. Its flight controls surface are: elevator on the horizontal stabilizer, rudders on the vertical stabilizers, and ailerons on the wings. It utilized skids instead if landing gear being propelled by either a pneumatic or rocket assisted launch and recovered by parachute.
The Mohajer-2 is powered by the 26 hp WAE-342 twin-cylinder piston engine fitted with a pusher propeller. 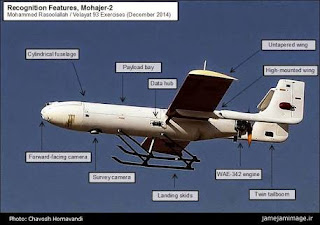 It is a combat capable UAV however, slight structural modifications has to be made to the wing to enable it mount munitions.

During the Iran-Iraq war, the Iranian technicians would fit the drone with two 6-rounds RPG-7s making the Mohajer the first combat UCAV in history.