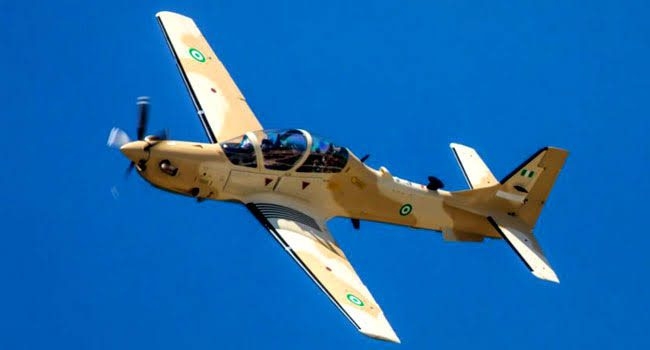 Delivery of all twelve A-29B Super Tucanos to the Nigerian Air Force has been completed, with the last six aircrafts touching down in Kano on 29 September a day before the deadline set by the Air Force.

Four of the A-29 Super Tucano aircraft landed in Glasgow Prestwick Airport in Scotland on September 25, after spending 7 days stuck in Keflavik, Iceland due to strong winds. Two aircraft were also left behind due to technical issues.

They finally departed the Keflavik Airport, Iceland to Prestwick on September 24 when the weather became permissible.

Sierra Nevada Corporation(SNC) was awarded a $329 million Foreign Military Sales contract from the US government to build the 12 A-29 Super Tucanos for the Nigerian Air Force in 2018.

A-29 Super Tucano is currently in operational service with the air forces of 15 nations, including Afghanistan; Angola; Brazil; Burkina Faso; Chile; Colombia; the Dominican Republic; Ecuador; Indonesia; Lebanon; Mali; Mauritania; the Philippines; Senegal and the US.