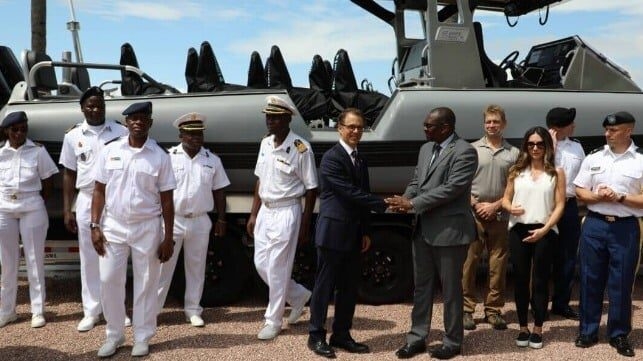 The donation is part of a broader U.S.-led security assistance program designed to enhance the resilience of the Mozambican Navy in fighting terrorism and transnational organized crime in the Mozambique Channel

As part of the U.S. commitment to assist Mozambique in stabilizing the conflict-ridden Cabo Delgado province, the U.S. government this week donated a patrol boat to the Mozambican navy.

The 33-foot SAFE high-speed boat, valued at $700,000, will be used for interdictions and maritime boarding operations. In addition, the Mozambican Navy officials will participate in training offered by the U.S based manufacturer, SAFE Boat International.

The donation is part of a broader U.S.-led security assistance program designed to enhance the resilience of the Mozambican Navy in fighting terrorism and transnational organized crime in the Mozambique Channel. These programs include International Military Education and Training, three Joint Combined Exchange Training programs, a Maritime Maintenance and Logistics Advisor program, and equipment donations designed to improve, maintain, and support the Navy in the execution of its defense strategy.

These efforts come at an important time as Mozambique is emerging on the international stage and poised to become a supplier of natural gas to Europe. The first shipment was completed in mid-November sourced from the Coral Sul floating LNG vessel, operated by the Italian multinational energy company Eni and under contract to BP. Others from the energy industry, including ExxonMobil, China’s CNPC, Portugal’s Galp, South Korea’s Kogas, and Mozambique’s ENH, are partners in the LNG operations.

Speaking during the boat’s handover ceremony in Maputo on December 7, the U.S. Ambassador to Mozambique Peter Vrooman said “This vessel will enhance maritime security and enable naval forces to respond to increasingly complex challenges and threats. We provide training and educational opportunities for Mozambican and American soldiers, sailors, and marines who choose to serve their country. Together, we are working toward a stronger, more resilient Mozambique.”

In April, the U.S. government announced Mozambique as one of the priority locations selected for the U.S. Strategy to Prevent Conflict and Promote Stability. The strategy outlines cooperation with the Mozambican government and civil society at the national and local levels to invest in long-term, locally-led approaches to address the causes of conflict.

At the peak of the Cabo Delgado insurgency in 2021, the aggression in the region became a serious maritime security threat in the Western Indian Ocean. At one point, the insurgents captured the coastal town of Mocimboa da Praia.

The U.S. government has come out as an important partner to Western Indian Ocean (WIO) countries in boosting maritime security in the region. In addition to Mozambique, The U.S. is also expanding its efforts with Somalia, once the haven for pirates, with new programs to grow Somalia’s domestic capacity to protect its territorial waters and combat illegal fishing.