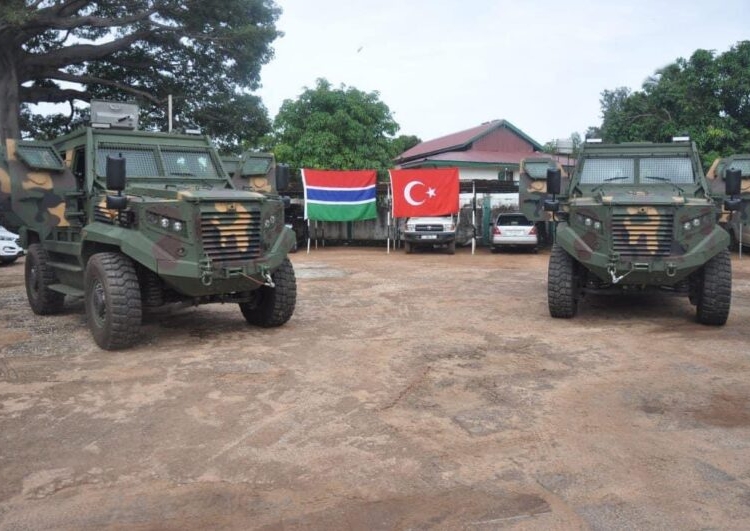 The Turkish government has gifted two Katmerciler Hizer armoured vehicles to the Gambian military to further deepen their relations.

The two Katmerciler Hizer 4×4 were handed over to the chief of defence staff of the Gambia armed forces at the defence headquarters in Banjul in October.

This gesture is part of Turkish Government’s efforts to complement and support the Gambia Armed Forces readiness to deploy troops in a United Nations mission with their country-owned equipment.

The donated Katmerciler Hizer armoured vehicle will join others of it’s type acquired in June this year.

Gambia ordered at least 20 HIZIR 4×4 armoured vehicles from katmerciler in an agreement signed in August 2021.

Speaking at the event, the Turkish Ambassador to the Gambia His Excellency Tolga Bermek expressed delight on how rapidly the bilateral relation between the two countries is growing.

Ambassador Tolga highlighted that the Government of Turkey has been committed to intensifying its support to the Gambia Armed Forces in the areas of capacity building programs and logistic support.

The Republic of The Gambia and the Republic of Turkey enjoy deep-rooted ties of friendship and relations between the two countries have been rapidly improving in all fields.

Both countries have signed several bilateral Agreements, Protocols and Memorandums of Understanding.

The Republic of Turkey continued to render valuable support to the government of The Gambia’s development initiatives.

Gambia is the latest Hizir operator, after Kenya and Uganda also acquired the type. Kenya ordered 118 of the type last year, for delivery in 2022-23, while Uganda ordered 30, with deliveries in 2020 in the type’s first export sale.

Turkey continues to develop military relations with The Gambia, the smallest country in West Africa. Two hundred fifty Gambian soldiers were sent to the western city of Isparta on Thursday on a Turkish A400M military transport aircraft to receive counterterrorism training.

The Gambian soldiers hosted by the Counterterrorism Training and Exercise Center Command will also receive motorized infantry training this week.

Military relations between the two countries, which started in 1991, reached a new phase with a joint defense cooperation agreement signed in 2014 under which Turkey accelerated its personnel training along with material support to the Gambian army.

Earlier in 2019, Turkey donated military equipment to Gambia at the country’s military headquarters in the capital Banjul.

Ambassador Ismail Sefa Yuceer at the time said Turkey’s support to Gambia’s military in 2018-2019 totaled $1.4 million. He said the support was part of a technical assistant program that has been going on for the past 16 years.