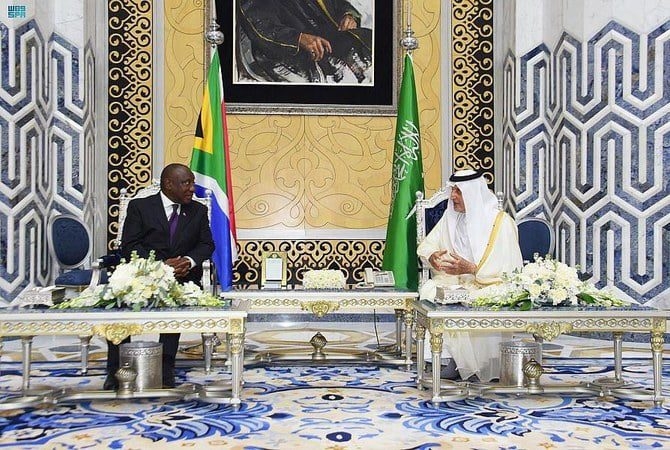 South Africa’s President Cyril Ramaphosa was received by Prince Khalid Al-Faisal, the governor of Makkah, upon his arrival in Jeddah. (SPA)

South Africa and Saudi Arabia on the 15 and 16 of October, signed a Memorandum of Understanding on 17 different sectors including defence, during President Cyril Ramaphosa’s recent trip to Saudi Arabia. The MoU aims to establish a framework of cooperation between the two countries.

President Cyril Ramaphosa was accompanied by defence minister Thandi Modise and an Armscor delegation and was hosted by Crown Prince and Prime Minister Mohammed bin Salman bin Abdulaziz al Saud.  The two sides held an official session of talks, where they reviewed relations between their two countries and aspects of cooperation in various fields,

“Having started in 2018 with a commitment by Saudi Arabia to invest 10 billion dollars into the South African economy, in many ways was planting the seed and that seed has been germinating and thus far one billion dollars has been invested in South Africa through a company called ACWA Power”, said Ramaphosa after the visit.

The Presidency in a statement noted that the MoU covered “cooperation in the field of military industries and procurements.”

Defence minister Thandi Modise and Armscor CEO Solomzi Mbada met with the Governor of the General Authority for Military Industries (GAMI), Ahmed Bin Abdulaziz Al-Ohali, where they discussed cooperation and partnership in the field of military industries, and the next action steps between the GAMI and the Armaments Corporation of South Africa.

This new defence MoU is in line with Armscor’s latest business strategy it outlined in its 2021 annual report, which prioritised building partnerships and growing the commercial side of Armscor

Armscor intends to take advantage of the growing African and global markets, as well as a capital injection from Saudi Arabia and Turkey following an agreement.

Ramaphosa ended his trip over the weekend and said the trip and subsequent investment were long in the making.

He said: “Having started in 2018 with a commitment by Saudi Arabia to invest $10bn into the South African economy, in many ways was planting the seed, and that seed has been germinating. [T]hus far $1 billion has been invested in South Africa through a company called ACWA Power.”

Saudi Arabia has been vying to become a member of the BRICS emerging economic countries, which currently include Brazil, Russia, India, China, and South Africa.