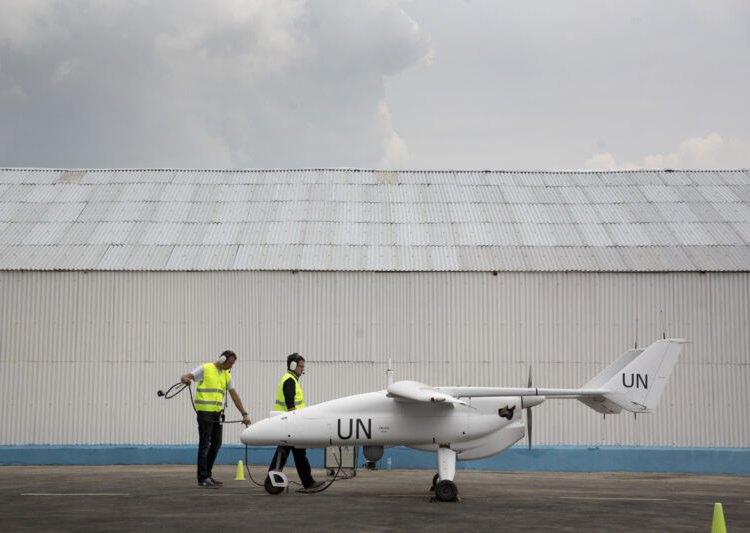 A technician team prepare the launch of MONUSCO Unarmed drone during official ceremony with Herve Ladsous, Goma the 3rd of December 2013. © MONUSCO/Sylvain Liechti

The downed Falco Evo drone was recovered relatively intact my the locals near Virunga park.

Leonardo ES Falco are operated by Italian contractors under the aegis of the United Nations Organisation Stabilization Mission in the DR Congo (MONUSCO).

The UAS are routinely tasked to support the protection of civilians, monitor illegal Armed Groups and observe humanitarian aid convoy.

The Falco Evo UAV has proven to be part of the solution to a set of problems being faced by MONUSCO such as surveillance of difficult to access areas.

The UN on 1 August 2013 confirmed that its Department of Peacekeeping Operations selected the European supplier for a requirement to support the MONUSCO mission. “The deployment of the UAV is planned in coming weeks,” the organisation says, while describing the activity as a “trial use”.

“The use of unarmed UAVs will allow UN peacekeepers in the Democratic Republic of Congo to monitor the movements of armed groups and protect the civilian population more efficiently, particularly in the country’s eastern region,” the UN says. “The UAV will be operated by the contractor under the strict control and security of the UN, with all data provided exclusively to the peacekeeping mission concerned.”

Leonardo Selex ES Falco Evo UAS was selected in July, following an evaluation process conducted by the Department of Peacekeeping Operations, the Falco is “capable of carrying a range of payloads, including several types of high-resolution sensors,” the UN says. Its choice follows a process during which 25 suppliers from 11 nations sent representatives to the African nation, it adds.

Selex confirmed the UN announcement about its selection for the requirement in July 2013, but declines to comment further about the deal or equipment package at this time.

The UN on 5 August valued its contract with Selex at €10 million ($13 million) per year for an initial three-year period, with an option to extend the arrangement by a further two years.

A single Falco Evo drone crashed in 15 January 2014, at the airport in Goma in Eastern DRC, where the aircraft are based.

Headquartered in Kinshasa, the MONUSCO force comprises more than 20,400 personnel, including almost 18,500 troops from 50 countries, according to UN data.

Sensors being used in the Falco UAV include a thermal imager, a colour TV camera, a spotter or a laser designator, NBC (nuclear, biological and chemical) sensor, an electro optic sensor and an infrared sensor.

Infrared sensors are primarily used by ground vehicle operators for clear visibility of the battlefield. They capture infrared rays emitted by objects.