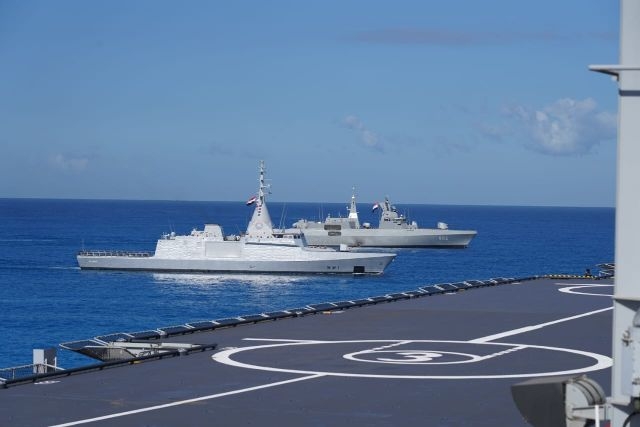 MEDUSA 12 military exercise kicked off on Saturday 19 to Friday 25 November 2022 in the Mediterranean Sea, Egypt.

Egyptian air, naval and special forces are taking part in the air and naval drills. Also, forces from Greece, Cyprus, Saudi Arabia, and the US are participating in the Medusa-12 drills.

The UAE, Bahrain, Jordan, Germany, France, Romania, Congo, and Morocco are partaking in the military exercises as observers.

Exercise “MEDUSA 12” aims to strengthen the cooperation of the Armed Forces of the participating countries, as well as to conduct operational training at an interdisciplinary level and in a multi-threat environment, strengthening the role played by Greece and Egypt in the wider Mediterranean region, Middle East and North Africa as pillars of stability and security.

The exercises fall within the framework of exchanging expertise and promoting military cooperation between Egypt and friendly states to face challenges in the Mediterranean region.

The series of “MEDUSA” exercises is part of the overall planning of the Greek military regarding the international cooperation of the Armed Forces as well as the Military Cooperation Program (MCP) of Greece and Egypt for the year 2022 and further deepens the excellent and multi-level relations between the two Countries.

The main stage started with a detailed briefing on the training activities and timeline aboard Egypt’s “Mistral” Anwar El Sadat helicopter carrier.

The participating troops conducted a parachute drop by paratroops and a raid on a coastal target, in addition to carrying out air bombardment against a number of hostile targets on the coast by multi-tasking aircraft.

The training involved the execution of artillery shooting by the m. arine units against asymmetric targets.

The drill included searching suspicious ships and training on how to counter an air attack.

Naval units and multi-tasking aircraft from the participating countries presented a joint show at the conclusion of the main stage.

Askar said the exercise aims to exchange expertise and get acquainted with the latest combat tactics of the countries participating in the training, praising the outstanding performance of troops and their high morale during the execution of various combat phases, as well as their ability to carry out joint tasks with professionalism and accuracy.

The Egyptian Armed Forces participate with:

The Armed Forces of Cyprus participate with:

The US Armed Forces participate with 1 Marine Group.