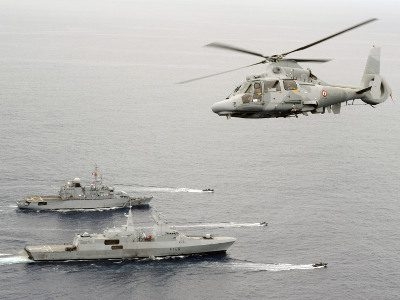 This year’s Exercise Oxide is taking place around the False Bay area and the West Coast of the Western Cape, will end on 28 November.

The exercise will comprise of various maritime exercises, the main objective being search and rescue. Other objectives include surveillance, disaster relief, hostage negotiations and releases.

Joint Task Force Commander, Captain (SAN) NK Goboza, noted that the objective for this year is to conduct joint Visit, Board, Search and Seizure (VBSS) exercises “which is a current challenge to the maritime environment whereby we may be tasked to go and rescue a vessel that has hostages onboard.”

He explained that “continuously exercising together would make sure that were an incident to happen, both navies were “already in sync in terms of tactics, Standard Operating Procedures (SOPs) and communications, we know who to call and what to do.”

The French Defence Attaché, Captain (Navy) AL De Lapeyriere, confirmed that this exercise afforded both nations the ability to test its interoperability as both nations face the same maritime issues.

De Lapeyriere continued: “We also share the fact that we are the only nations in the area to have a strong Navy with frigates with high level capabilities. Seen from France, South Africa is a very important partner (with whom) we want to improve our relations.”