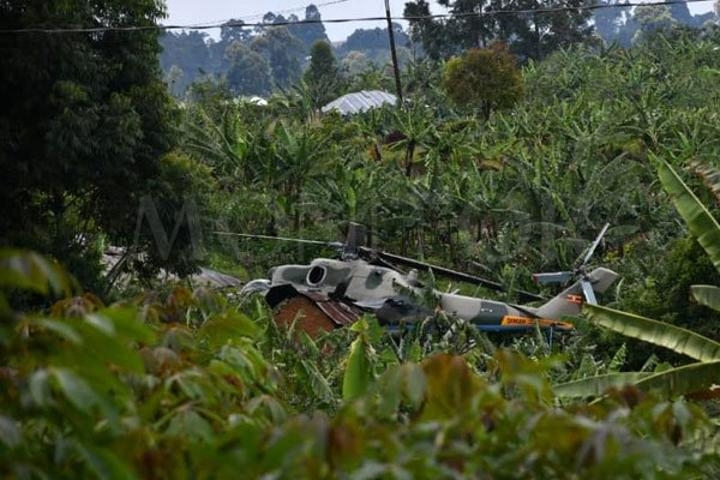 The Ugandan military on Wednesday lost two helicopters to crash in eastern Democratic Republic of Congo (DRC), which resulted in at least 22 people killed. One was an Mil Mi-17 helicopter primarily used for transportation. One of the crashes was near the village of Boga in Congo’s Ituri province on Monday, and the other was in the border zone of Kabarole, Uganda on Tuesday. This latest incident highlights Uganda’s spotty record with helicopters operation.

According to a Ugandan army spokesman, the Ugandan Ministry of Defense has not yet revealed the circumstances of the incident,” and the Ugandan President Yoweri Kaguta Museveni had ordered an investigation into the accidents as soon as possible.

It was reported that the helicopters were involved in supplying Ugandan troops on Congolese territory who are fighting with government forces in the DRC against troops from the terrorist group Alliance of Democratic Forces for the Liberation of Congo (AFDL). One of the helicopters crashed immediately after takeoff, while no information has been provided for the second helicopter.

Uganda deployed its soldiers to the DRC in December last year to help fight a rebel group known as the Allied Democratic Forces (ADF). The AFDL was formed from a Muslim sect in western Uganda in 1995 as an Islamist organization in opposition to the government. In 2003, AFDL forces fled to eastern DRC to escape Ugandan army attacks.

An Mi-24 helicopter also crashed on Monday last week in Fort Portal city, another Mi-24 crashed in Mityana on July 26, but in both these incidents, no soldier was killed. The former was reported to have developed mechanical faults.

Uganda People’s Defence Air Force (UPDAF) spokesperson, Maj Moses Irimaso Mugisha, regarding the incidents said he had not accessed any of the reports. Even though UPDF has not made public reports explaining the reasons behind these crashes, some incidents have been blamed on recklessness, lack of maintenance, and lack of knowledge on flight routes to take regarding weather changes or topography.

In August 2012, while attempting to storm an Al Shabaab hideout in Somalia, three out of a four-ship helicopter force that took off from an airfield in Uganda on crashed before ever coming close to the battlefield. Likewise, in 2015, a Ugandan supplied a presidential helicopter to John Garang, the southern Sudanese guerrilla leader crashed soon after into the mountain.

Wolfgang H. Thome, an aviation consultant in Uganda, told The New York Times that Uganda’s air force, like others in the region, was mostly composed of reconditioned, secondhand “old birds.” This is the primary reason for the many crashes witnessed over the years. Uganda flies around five Mil Mi-24 Hind gunships, a cousin of the more capable Mi-28N helicopter. The East African country recently increased its defence spending to step up to it’s neighbor and regional rival Kenya, amid a new arms race in the region. Between 2012 and 2021, Uganda’s military expenditure rose by 203 percent, and it’s military expenditure reached Sh123.1 billion ($1.066 billion) last year, an 8.3 percent increase from Sh113.7 billion ($984.7 million) in 2020. The East African country also acquired three Mi-28N Havoc attack helicopter from Russia to bolster its aerospace force.

To remedy this, Uganda, and its military’s commercial arm, the National Enterprise Corporation-NEC and Pro-heli International, a Russian Company recently commissioned a helicopter maintenance, repair and overhaul plant at the Nakasongola Air Force Base. The MRO plant which was commissioned by President Yoweri Museveni, aims to service the entire African helicopter MRO market including helicopters in use by UN Missions.