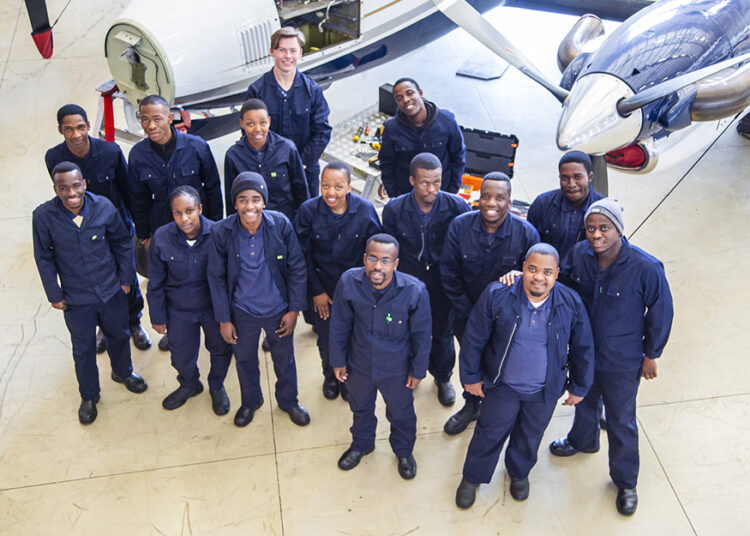 The fully accredited Technical Training Academy is situated at Wonderboom National Airport close to the aircraft production facilities where the Mwari reconnaissance and light attack aircraft is manufactured.

According to Paramount, the Technical Training Academy was established to serve the training needs of young Africans from across the continent, those who aspire to reach careers such as aircraft technician or aircraft maintenance engineer.

The academy was provided a grant in 2019, by South Africa’s Transport Education Training Authority (TETA), which enabled seven students in early 2022 to complete a three-years course to qualify as aircraft technicians.

“We are absolutely delighted that, with the support of the training grant offered by the Transport Education Training Authority (TETA), students will be able to participate in our comprehensive programme, one that is presented by industry veterans with decades of combined experience,” stated Brian Greyling, CEO of Paramount Aerospace Systems.

“With our comprehensive training solutions that cover all of the technical aspects of aviation, we are addressing the dire shortage of technical skills in the local aerospace sector and further, unlocking pathways for our students to embark on prosperous lifelong careers in both the local and international aviation industry”.

The PAS Technical Training Academy, which was previously based at Polokwane, was relocated to Wonderboom just north of Pretoria, and according to Brian Greyling, CEO of Paramount Aerospace Systems, “Our Training Academy hosts a sterling track record of producing results, where workshop practice follows directly on from classroom theory, and with the aid of training devices and actual aircraft, effective knowledge uptake is assured.”

“With huge growth projected for the local aviation sector, and across the African continent, the increased demand for qualified aircraft technicians is going to soon outweigh the very limited pool of available resources within the country to-date,” added Greyling.

In the next few years, the PAS Training Academy hopes to expand rapidly to address the urgent requirement for more certified technicians.

Three remaining graduates are presently being assisted in finding and securing their first positions by instructors at the Training Academy, alongside private aircraft maintenance organisations [AMOs].

“For aircraft to operate safely and efficiently, it is imperative that properly qualified aircraft technicians are available to perform the required maintenance actions and in addition, support actual flight operations. Our Technical Training Academy provides high quality technical training, offering a regular curriculum of exams that lead up to trade test preparation, and then actual trade testing, all from within a single facility, which we believe is an immense achievement,” Greyling concluded.

According to Paramount on 11 January, the new division, called Paramount Advanced Training and Support, will consolidate the Group’s existing global training, support and skills development capabilities across its land, sea and air operations.