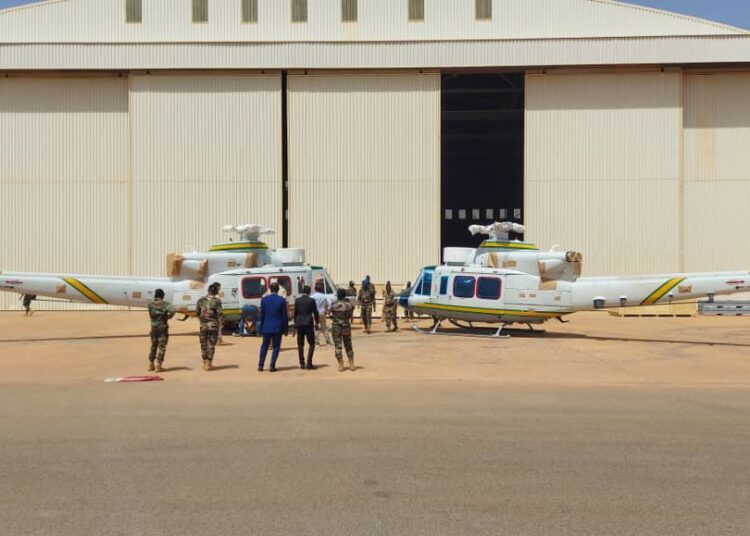 The Nigérien Air Force has taken delivery of two out of four Agusta Bell AB 412 helicopters from Italy.

Italy and Niger maintains a bilateral defence and security relations since September 2017, with Italy providing military training to Nigerien troops.

The 412 helicopter is manufactured by Bell Helicopters and AgustaWestland under a licensed production arrangement for the European, African and Middle East civil and military markets.

Defence minister Indattou said the delivery was the result of close ties between Italy and Niger, and the helicopters will be used to strengthen Niger’s Air Force and carry out personnel transport, cargo and medical evacuation flights, and combat cross-border crimes.

The utility helicopters will drastically enhance the aerial capacity of Nigér’s special forces particularly those of the 1st Expeditionary Force of Niger (EFoN), the country’s premier anti-terrorism unit.

A lack of transport and attack helicopters in sufficient numbers is seriously impeding the 1st Expeditionary Force of Niger (EFoN). EFON has been fighting violent extremist organisations (VEO) since early this decade.

The expeditionary force carries out regular raids and patrols to dislodge ISIS from the area. However, due to limited helicopter support, the force counter-terror force is not making as rapid gains as hoped.

The Bell 412 can climb at the rate of 6.86m/s. The maximum and cruise speeds of the helicopter are 259km/h and 226km/h respectively. The range is 745km, which can be extended up to 980km. The service ceiling is 6,096m. The maximum endurance of the helicopter is three and a half hours. The helicopter weighs around 2,920kg and its maximum take-off weight is 5,398kg.

The Italian government has deployed a Bilateral Mission in support of Nigér to help increase the capacity of the defence force and other members of the G5-Sahel Initiative to counter illegal trafficking, terrorism and other security threats in the area.

Nigér has received or ordered a variety of military hardware over the last several years, in October it was supplied with several pieces of military equipment from Washington to support its fight against jihadists plaguing the west and southeast of the country.