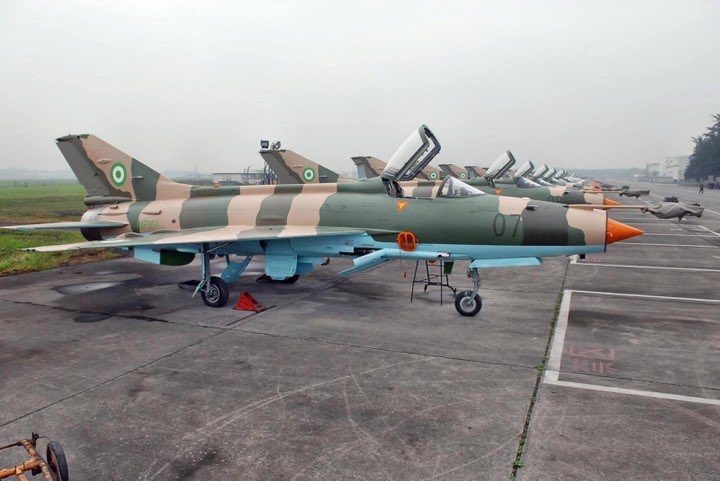 The F-7Ni is a license built version of the Soviet Mikoyan-Gurevich MiG-21, and thus shares many similarities with the MiG-21.

Seven of the F-7Ni aircraft were shipped out to China, representing more than 70 per cent of the entire air defence fleet, they are expected to be replaced or complemented by three new JF-17 Thunder multirole aircraft delivered in November by Pakistan.

The two remaining aircraft left in Nigeria also underwent extensive rehabilitation programs locally to extend their service life. And a single aircraft was apparently sent to China later on for reactivation. The Airguards are currently being assembled at the Nigerian Air Force base in Makurdi, Benue State.

The F-7Ni is a single-engine, lightweight fighter aircraft designed and manufactured by Chengdu Aircraft Corporation (CAC) in China. Its design is based on its predecessor, the MiG-21 aircraft.

In 2005 Nigeria approved the US$251 million procurement of 12 F-7Ni single-seat fighters and three FT-7Ni dual-seat trainers from China. The package also included US$32 million worth of PL-9C air-to-air missiles, rockets and bombs.

Nigerian pilots began training on the jet in China in 2008 while delivery began in 2009 and concluded in mid-2010.

On March 22 2011, the Nigerian Air Force lost an F-7Ni. The aircraft was taking off from 303 Flying Training School at Kano’s Mallam Aminu International Airport when it failed to lift off, crashed and exploded. The pilot, Group Captain Enny Bibinu Saleh, died in the crash.

Another F-7Ni was lost on May 11, 2011, when it crashed near a school at Mbaniongu Mbazaam in Benue State, but no casualties were recorded. Both pilots successfully ejected from the aircraft.

A Nigerian Air Force F-7Ni fighter crashed in May 2012 whilst on a routine training exercise. The pilot, who ejected from the aircraft, survived the crash. The aircraft came down close to Kaduna International Airport. Nigerian Air Force spokesman Air Commodore Yusuf Anas in a statement said the pilot ejected safely from the single-seat fighter.