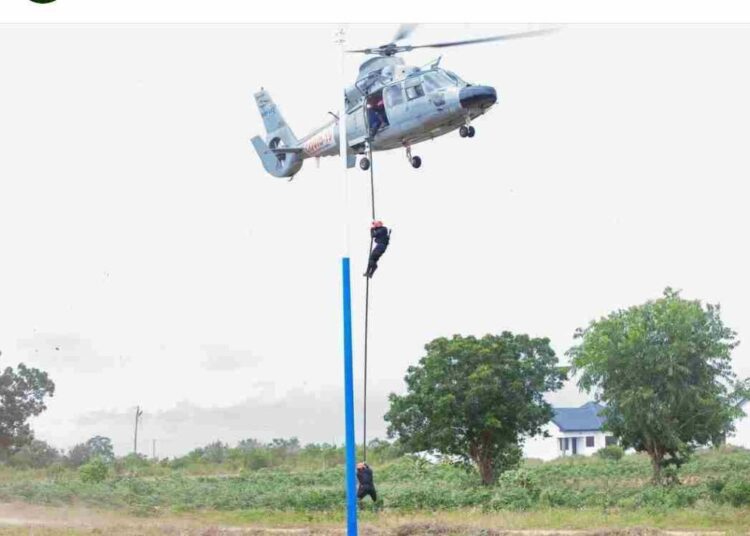 The SBS cultivates special forces skills such as speed, security, surprise and purpose

Ghana’s elite special operations force; the Special Boat Squadron (SBS) has graduated its first batch of operators who were trained in the country.

Eight new special boat operators completed the rigorous six-month course and were the only ones out of a class of 25 to successfully finish and receive special forces badge.

They trained at the Naval Training Command in Nutekpor which was opened two years earlier. They will now join the SBS, an elite special forces unit trained to counter piracy and trafficking and conduct opposed boarding of ships.

Building domestic training capability is a major part of the country’s SBS 5-year Development Plan, which was created in partnership with the U.S. and the Danish Special Warfare Group known as the Frogman Corps.

The units are particularly important as Ghana seeks to protect its offshore oil and gas installations and its fisheries sector.

Chief of Army Staff Maj. Gen. Thomas Oppong-Peprah praised the SBS as “quiet professionals” and said they are among the most flexible and useful instruments in the country’s national security toolbox, the Ghana Peace Journal reported.

“They operate deep at sea and in remote areas making difficult decisions every day in austere, uncertain, and unstructured environments,” Oppong-Peprah said at the graduation ceremony on September 15.

Created in 2016, the Ghana SBS typically works in tandem with traditional units from the Navy or Army. Lt. Cmdr. Seth Dzakpasu, commander of the SBS, said potential squadron members are volunteers from within the Ghana Navy who are screened and shortlisted to attempt the training. The Basic Operator Capability course is, he said, the most difficult course there is in the armed forces. It is both “grueling” and “academically daunting” preparing trainees to operate in desert, mountain, jungle, river or sea environments.

After that, there are follow-on intermediate and advanced courses throughout an operator’s career to sharpen skills.

“The SBS course is in phases,” he told ADF during the Naval Infantry Leadership Symposium held in Dakar, Senegal, in July. “It is designed to first condition you to work in small groups and move rapidly, then the other phases develop your mindset, the mindset to know the possibilities that a standard military unit might think is impossible.”

The SBS cultivates special forces skills such as speed, security, surprise and purpose, he said.

“These are the principles that enable a small entity to take on attacks which, traditionally, should have been conducted by a larger entity, sometimes three times the size, and achieve results,” he said.

Previous SBS graduates were trained with the help of Nigeria. A strong partnership has developed between the Ghana SBS and the Nigerian Special Boat Service, which has taken a lead role in some of Nigeria’s toughest counter-terror fights.