No Result
View All Result
Home Sponsored
Sponsored by

We’re more than aviation experts, we’re pioneers. We challenge what’s possible. From breaking the sound barrier to developing the tiltrotor, we’ve reimagined the experience of flight for more than 85 years. Today, we’re redefining what flight is capable of. 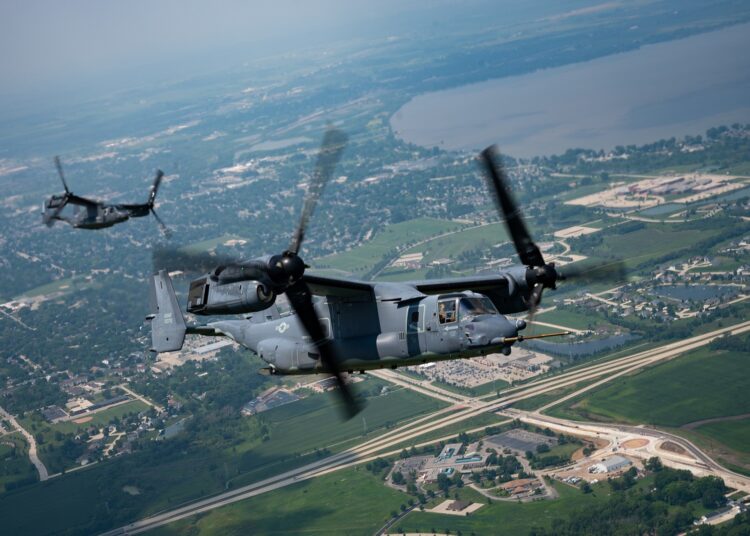 The development of new technology is central to the integration and transformation of military operations.

Proven throughout history with examples like the speed and range of vehicles, the efficiency of production, or innovation of new ideas to solve previously unsolvable problems, technology has radically shaped national and global defense strategies.

The most versatile and game-changing technologies have enabled operators to complete more tasks with less economic and physical resources.

One such revolutionary piece of technology is tiltrotor, exemplified by the V-22, the Osprey combines the vertical takeoff, hover, and vertical landing qualities of a helicopter with the long-range, fuel efficiency, and speed characteristics of a turboprop aircraft.

From 1984 through 2007 over twenty studies compared the V-22 to all currently available and proposed rotorcraft and showed the V-22 as the most cost-effective solution.

“The Osprey represents Bell Boeing’s incredible ability to reimagine the experience of flight and disrupt an entire industry.”

With over 400 aircraft accumulating 650,000 flight hours for the U.S. military alone, the world’s only military tiltrotor in production enhances versatility and interoperability throughout the world.

“The Osprey has a demonstrated legacy of mission success over its 30 years of operation,” said Shane Openshaw, Boeing V-22 vice-president and Bell Boeing V-22 deputy program director. “We are focused on a bright future ahead, built on customer partnerships and a commitment to innovation, agility, and readiness.”

Initially developed as an aircraft for the United States Marine Corps to conduct combat and assault support, the Osprey ensures that service members can conduct diverse missions throughout the world’s most demanding operating environments.

The V-22 Osprey allows Marines to quickly deploy troops, equipment, and supplies from ships and land bases with the speed, range, and versatility not previously possible by any single platform. These characteristics offer the tactical flexibility to deploy with a smaller logistical footprint and without a runway to access unreachable areas with any other aircraft.

Being able to transport troops and equipment faster and with greater precision is just one benefit of the Osprey. The tiltrotor also enhances capabilities for other types of missions where response time is critical.

Humanitarian Aid and Disaster Relief, HADR, missions immediately benefit from the enhanced speed, range, and precision. One such mission was Operation Damayan. After Super Typhoon Haiyan devastated parts of the Philippines in 2013, the 3rd Marine Expeditionary Brigade deployed the V-22 to provide assistance.

The V-22 stood out as the most capable aircraft to support over a long distance by traveling more than 1,100 miles and providing immediate support in the disaster area. The Osprey’s helped evacuate 1,200 people and delivered 20 tons of critical supplies to areas where planes and helicopters couldn’t reach alone.

The Osprey is also ideally suited for patients in need of critical care casualty evacuation. The rapid, precise, insertion and extraction of the V-22 combined with greater speed and range than a conventional helicopter provide an expanded range for patients within the “golden hour’ of receiving urgent health treatment.

Over time, additional service branches added the V-22 to their aircraft fleet with specific modifications to suit the needs of their forces. Today the Osprey serves the U.S. Marines, U.S. Air Force, U.S. Navy, and Japan Ground Self Defense Force, its first international customer.

The Bell Boeing V-22 Osprey continues to distinguish itself in an expanding number of roles as one of the most versatile aircraft in the world.
The MV-22B provides rapid assault support transport for troops, supplies, and equipment throughout the world to expeditionary, joint and combined operations.

On December 31st, 2019, the Marines used the MV-22 Osprey to quickly transport troops faster than any conventional helicopter to the U.S.

Embassy in Baghdad and landed directly within the compound walls. The rapid insertion of troops bolstered the embassy’s defenses and helped protect those inside during a moment of increased tension where time was a critical strategic element.

The CMV-22B, the program’s most recent variant, is the replacement for the C-2A Greyhound for the carrier onboard delivery, COD, mission and notably provides the U.S. Navy with significant increases in capability and operational flexibility.

Key attributes of the CMV-22 in support of the COD mission are the Roll-on Roll-off resupply and ability to transport the Joint Strike Fighter Power Module, interacting with other ships within the carrier strike group, operating outside of fixed-wing launch and recovery operations, expanded sponsons and wing fuel tanks.

The first international variant, The Japan Ground Self-Defense Force (JGSDF) procured the V-22 in 2015 through the foreign military sales (FMS) process to modernize its transport fleet and support its defense and special mission needs.

The V-22s enhance their humanitarian and disaster relief capabilities and support amphibious operations.

“Demand for tiltrotor capability is a testament to the value of the Osprey’s versatility throughout the world,” said Fuller. “The V-22 will be around for a long time, and we expect it will continue to evolve to meet the needs of the Department of Defense.”

As the V-22 began operating across more missions, Bell Boeing worked with the Department of Defense to improve the entire V-22 fleet with initiatives focused on increasing reliability and availability while reducing maintenance downtime.

Nacelles house the Osprey’s engine and critical wiring components and approximately 60% of maintenance man-hours are spent in the nacelles. Improvements in the wiring and structure will help reduce repair time and increase mission readiness and reliability rates.

The first CV-22 nacelle improvement kit completed installation in December 2021 at the Amarillo Assembly Center in Texas. Following the Air Force, the Marine Corps is also looking to incorporate the benefits of improved nacelles and wiring improvements into the MV-22B.

For more than 30 years, the Osprey has advanced single aircraft capabilities and radically enhanced mission capabilities. As the needs of the military continue to evolve to the modern world, so too does the Osprey. Benefiting from a foundation of versatility, the V-22 remains ideally situated to respond with speed and agility in a way that only a tiltrotor can.