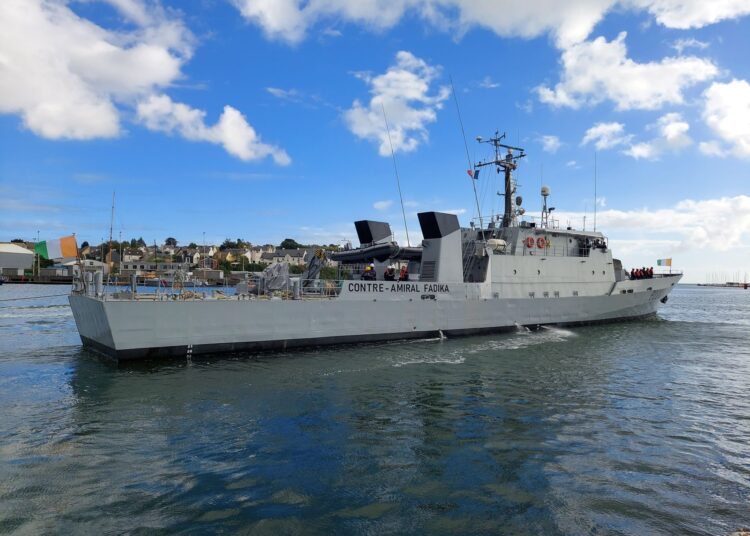 The Ivorian Navy has taken delivery of a second-hand P400 54.8 meters offshore patrol vessel from France. The vessel Contre Amiral Fadika was handed over in a ceremony last week after extensive refurbishment by Piriou.

In April, Ivorian Admiral Kouame announced the forthcoming acquisition of the P400 opv, as well as two OPV-45s and maritime surveillance drones as part of revitalization of the navy.

The transfer of ceremony of the Contre-Amiral FADIKA Offshore Patrol Vessel to the Ivorian Navy took place in Concarneau (France) on Friday, 9 September 2022. The delivery of this vessel follows the signature by the Ministry of Defence of Côte d’Ivoire of a contract for its acquisition in April. The vessel was retired from service in 2012 and purchased by Piriou the following year.

According to Vincent FAUJOUR, President of the PIRIOU Group, “this delivery is the result of work undertaken several years ago between PIRIOU and the Ivory Coast authorities. Beyond the refit of the vessel, it is a relationship of cooperation and trust that has been established and that we are keen to cultivate.”

The redesign of this Offshore Patrol Vessel was carried out by the subsidiary PIRIOU NAVAL SERVICES (PNS) with the support of KERSHIP’s teams. This contract also includes a training session for the crew to take charge of the vessel in Concarneau before its departure as well as a two-year contract for Maintenance in Operational Condition.

The P400 class patrol vessels were small patrol boats of the French Navy. They were designed to accomplish police operations in the French exclusive economic zone (EEZ). They were built by the Constructions Mécaniques de Normandie, which specialises in small military craft. The P400 class were originally designed in two versions: one armed with Exocet MM38 missiles, and another public service version with a smaller 16-man complement; eventually neither of these versions were commissioned as the French Navy chose an intermediate version.

They are typically armed with Bofors 40L60 gun, two AA-52 machine guns, and a GIAT 20F2 20mm gun. Although, The engines of the P400 have been defective since the maiden voyage of the lead ship L’Audacieuse to Dakar, however, the P400 class can stay 15 days at sea, and have 20 days of food supplies for 28 adults.

In France, six 80-metre (260 ft) Patrouilleur Outre-mer (POM-type) patrol vessels were ordered as replacements for the P400s as well as for other French coast guard vessels In December 2019. They will be delivered between 2022 and 2025 to protect the exclusive economic zone of French overseas territories in the Indian Ocean and the Pacific.

The Ivorian Navy operational capabilities has been largely degraded after the first and second civil war, leaving it with few vessels for coastal surveillance and security. In 2018, it was reported that the Ivorian Navy was purchasing 30 RHIBs and ten patrol crafts from Raidco Marine to boost its operations.