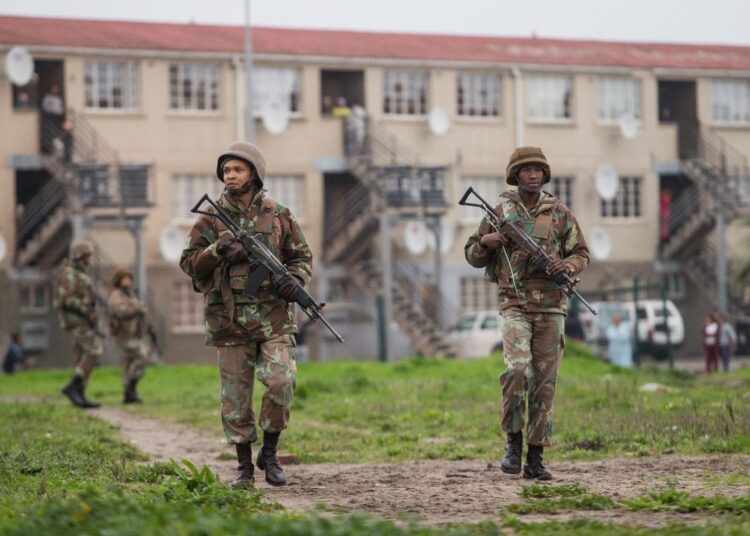 The world around us today is rapidly changing in a globalizing community. One can fly to many destinations at ease due to the (relatively) free movement of people. International trade has given rise to massive flows of goods, services, capital, and labor. Life is very convenient at the behest of capital. In the journal Scientia Militaria, Glen Segell argued that “The main security problem that any state faces today is protecting its citizens in countering organized crime and terrorism. Wars between states are less frequent than in previous eras.”

At the same time, the globally spreading threat of radical Islamic fundamentalism, famously in the name of al-Qaeda, Daesh (the Islamic State of Iraq and the Levant), al-Shabaab, and so forth, is threatening peace, security, and development. Within the homeland and across the borders in Northern Mozambique, the insurgency led by Ansar al-Sunna or Ahlu-Sunnah Wa-Jama (ASWJ) is a worrying threat for experts who believe that South Africa has become a key ISIS target. The Southern African country is one of the key strategic players on the continent and globally. When the insurgency gained international public and media traction, there were fears that South Africa’s (military) intervention would make it vulnerable to ad hoc attacks at strategic places such as malls, schools, and national key points. Clearly, that has not happened (yet). The consensus from researchers and experts concludes that a (jihad) terrorist threat to SA is still minimal as opposed to domestic unrest due to socio-politico-economic conditions plaguing a majority of the country. Regardless, it is better to prevent any type of violence and forthcoming ones in order to protect human lives, territorial integrity, and overall national security.

Media reports have been pointing out that the SANDF is inefficient and thus ineffective to defend the country due to its budgetary constraints. With a current budget allocation of R49, 090 billion for the 2022/2023 financial year, even the minister of defence and military veterans, Thandi Modise raised concern that underfunding may collapse the defence industry. Defence expert and director at African Defence Review, Darren Olivier has repeatedly cautioned about the SANDF’s overstretched mandate amid economic austerity, despite the fact that it is a more than capable force.

One interesting event was the leaked instruction document ordering 200 members of the SA Army Infantry Formation to be on 25-hour standby in the event of a civil unrest.  The document states that SA security “is gradually deteriorating to unrest due to criminality that is taking place within the borders” and this is worsened by a “perceived lack of action from the security forces to combat criminality.” The Defence Act 42 of 2002 provides for the employment of the SANDF (Chapter 3), among other things, to “effect national border control.” While the adage that the military should stay in the barracks is sound, security dynamics in the region (and globally) are changing. Threats, vulnerabilities, and risks are no longer exclusively external but also internal. According to the report of the Expert Panel into the 2021 July Civil Unrest, the SANDF contended that it should not be used as the first responder during civil unrest but “the experience of July has led to internal reflection in the leadership on how they can be better poised to respond to similar crises.” Similarly, military sociologist and professor Lindy Heinecken thinks that the SANDF should be trained in supporting policing roles to “equip them with the ability to interact and to protect citizens more effectively. Not as a primary goal for warfare.” This does not mean that its mandate should entirely change but rather respond to organized crime and violent extremist threats in the country and the region. Such a proposition is pertinent in light of calls to either increase defence spending—which is unlikely—or review the mandate of the SANDF to align its resources with its activities.

The Constitution of the Republic of South Africa, the Defence Act, and the general philosophy of civil-military relations in South Africa clearly emphasize that the role of the SANDF in internal security is that of a supportive and cooperative nature rather a command and control interventionist stance. The military basically shares powers with the police in that regard. It is also very important to be cautious of military interventions in domestic affairs since the military is trained to deal with defence and offence under heavy fire. During the 2020 coronavirus lockdown (as just one example), South African citizens had negative experiences with the army. On April 10, 2020, Alexandra resident Collins Khoza was brutally assaulted and killed by soldiers after he was accused of public drinking, in contravention of the Disaster Management Regulations that were in place then. The soldiers were found to have acted unethically, unlawfully, and in breach of relevant codes and practices.

While the role of the military in domestic affairs should be limited, counterterrorism expert and professor of politics, Hussein Solomon notes that the best way to deal with crime, violent extremism, and terrorism is to use institutions that are less criminalized and politicized in order to arrest a breakdown of law enforcement and national security. Over the years, a plethora of evidence has shown that the Crime Intelligence Division of the South African Police Service and the civilian State Security Agency have been dogged by criminality, politicization, and maladministration, leading to their ineffectiveness in tackling organized crime and violence. The military surely has its fair share of problems but can continue its support and cooperative role with the SAPS, given the lack of capacity, resources, and coordination. It is interesting to note that half of the 200 SANDF members who were ordered to be on 25-hour standby, underwent a “Crowd Control Learning program” to support the SAPS effectively. Perhaps this is a step in the right direction, although not perfect.