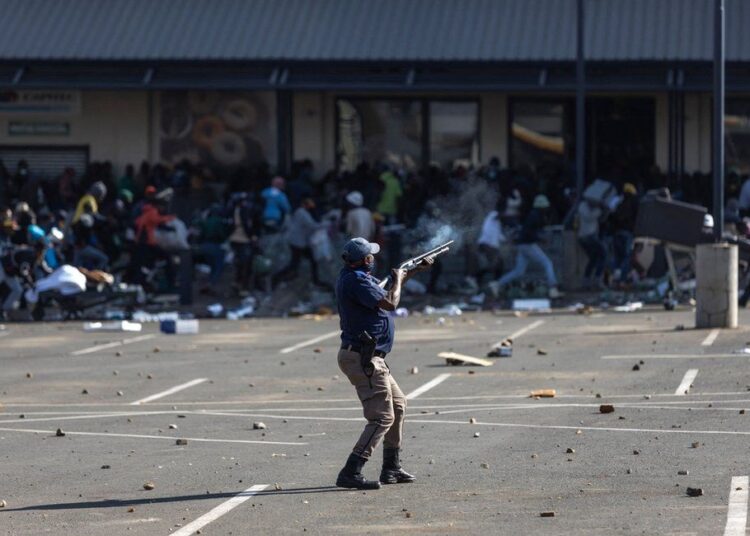 South Africa’s level of insecurity has reached an alarming scale with the level of organised crime, socio-political violence, protests, poverty, corruption and misgovernance. This has rendered the country restrained in its governance and service delivery endeavours. Across its borders, in Northern Mozambique, an apparent(ly) Islamist insurgency has reared its ugly head since 2017.  The insurgency is led by the Islamic fundamental extremist group Ansar al-Sunna, with some calling it al-Shabaab (“the youth”) due to its demographic. Mozambican authorities have continued to downplay the insurgency as a purely religious problem which can be crushed by the barrel of a gun. Experts on Mozambican politics like Joseph Hanlon argue that the insurgency is not mainly driven by Islamic fundamentalism. However, it is a grievance of communities plagued by poverty while they were beacons of the struggle. The violence and poverty-stricken province of Cabo Delgado was once home to Mozambique’s struggle for liberation between 1964 – 1974. “The fighting was the longest and most intense in the northern province of Cabo Delgado,” political conflict researcher and anthropologist, Anna Santos contends in a journal article.

The youth of Cabo Delgado are disgruntled due to inequalities, unemployment poverty and marginalisation. Joseph Hanlon highlighted that “there is a pool of increasingly alienated young people who do not see
a better future for themselves.”

The situation is no different than in South Africa. The country has been led by a ruling party since the 1994 democratic dispensation, which has amassed wealth while not tackling inequalities plaguing the majority of Black citizens. The country faced the July 2021 unrests which were as a result of a nexus between political deception over the arrest of former president Jacob Zuma, criminality, poverty and inequalities. Security forces were slow to respond to the crisis while ministers were disputing each other in public. The country is still going on a frenzy about the alleged instigators of the July 2021 riots and looting since there are continuing investigations with no end in sight, while prosecutions are nil if not dismal. Meanwhile, the national parliamentary complex was severely damaged in an arson attack earlier in the year, forcing the legislative body to move to a different building.

Analysis on the situation in Cabo Delgado shows that it brewed from organised crime to violent extremism. Tackling violent extremism is sabotaged since illegal markets such as drug and human trafficking, illegal mining and fishing are linked to business and political elites in power.

South Africa faces a serious vulnerability due to high levels of corruption, money laundering and organised crime. The Financial Intelligence Centre released a report on South African National Terrorism Financing Risk Assessment dated 31 March 2022 which details how SA is used as a consistent terror financing destination. The report clearly states that SA is an emigration hub for communities “from countries associated with terrorism such as Somalia, Kenya, Nigeria and Mozambique” which carry cash—for transactions and due to the informal economy—and at higher risk of terrorist financing. The report further notes that SA’s “border integrity” has diminished due to poor checks and balances. Rampant corruption, maladministration, money laundering and bribery (cases) in the country and at the department of home affairs has entrenched SA’s position as a base of operations or transit hub for terror suspects.

There have been various high-profile cases of corruption, money laundering and fraud involving businessmen linked to senior politicians. Much of the brazen misgovernance, corruption, fraud, theft, money laundering and nepotism were put on public display and trial at The Judicial Commission of Inquiry into Allegations of State Capture, Corruption and Fraud in the Public Sector including Organs of State led by chief justice Raymond Zondo. Such levels of unchecked crime and lack of accountability breeds a free-for-all ground for criminal and violent extremist acts. The youth bulge phenomenon which was coined by sociologist Gunnar Heinsohn offers a lens to make a risk assessment into the security situation and implications for State responses. Makaita Mutasa and Cyprian Muchemwa contend that a youth bulge occurs “when the population of the youth is much higher than other population age groups” as it is the case even in SA.