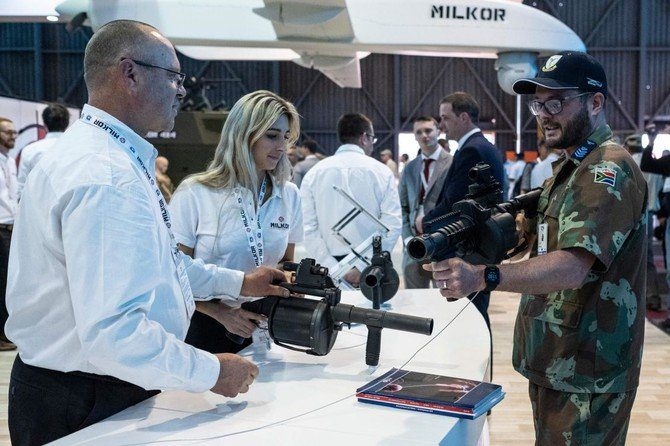 A member of the South African Defence Force holds a MK1S grenade launcher manufactured by Milkor, a South African manufacturer, during the Africa Aerospace and Defence Expo on September 20, 2018, at the Waterkloof Air Force base, on the outskirts of Pretoria. (AFP)

Defence manufacturer Milkor is expanding its footprint into Saudi Arabia and has been granted an investment license that allows it to make weapons in the Arab country.

The process started with Milkor signing a memorandum of understanding (MOU) with the Ministry of Investment of Saudi Arabia during the World Defence Show in Riyadh earlier in March.

The MOU seeks to allow Milkor to establish a presence in Saudi Arabia, which was followed by the investment license which has been granted. And now, registration is ongoing says Milkor.

Milkor Saudi Arabia CEO MC de Beer said, “The investment license allows us as a foreign entity to continue with the legal registration of the new company, which will be a military equipment manufacturer and a considerable amount of vetting and trust building had to be done to achieve this milestone.”

“We are proud of the outcome and appreciate the support and modernized mechanisms put in place by the Saudi government to efficiently establish a foreign-owned entity; this only demonstrates their seriousness in making the industry thrive”, de Beer said.

Milkor hopes to benefit from Saudi Arabia’s substantial defence budget, which stands at $46 billion (R760 billion) this year, according to the Kingdom’s budget statement.

According to Armand Bodenstein, Business Development Director at Milkor, “This latest international expansion does not only present Milkor with the opportunity to tap into the local market within the Kingdom of Saudi Arabia in line with their localization policy, but it also presents a new opportunity to share in the knowledge base available within the two countries and allows us to redirect resources back into the South African industry.”