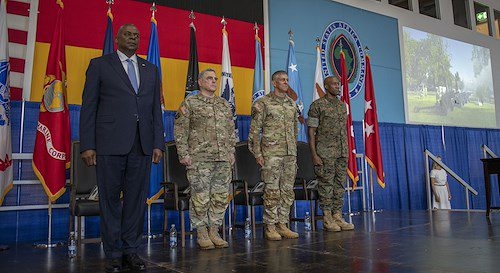 U.S. Marine Corps Gen. Michael Langley is now the sixth commander of U.S. Africa Command after a ceremony in Stuttgart, Germany, on Aug. 9, 2022.

“It is truly an honor to stand before you as the new AFRICOM commander,” Langley said at the ceremony. “I look forward to taking on the mantle of leading these talented professionals here at AFRICOM and across our components as we work shoulder-to-shoulder with our allies and partners to advance peace and prosperity for both Africa and the American homeland.”

Langley becomes the sixth AFRICOM commander since the command was established in 2008.

Secretary of Defense Lloyd J. Austin III presided over the ceremony at Kelley Barracks, where nearly 400 guests from around the world gathered for the change of command. During his remarks, he thanked outgoing commander Gen. Stephen Townsend, who served as commander of U.S. Africa Command since July 2019, for his dedicated leadership over the past three years as he highlighted the critical work the command is doing in Africa.

“The continent is on the front lines of many of this century’s most pressing threats — from mass migration to food insecurity, from COVID-19 to the climate crisis, from the drumbeat of autocracy to the dangers of terrorism,” he said.

Core to U.S. Africa Command’s mission is to work with allies and partners in a whole-of-government approach where defense supports diplomatic and development efforts to address shared security threats. “Every day, AFRICOM works alongside our friends as full partners—to strengthen our bonds, to tackle common threats, and to advance a shared vision of an Africa whose people are safe, prosperous, and free to choose their own future,” Austin said in later remarks.

Townsend, who led U.S. Africa Command since July 2019, retires after a U.S. Army career spanning four decades. “The last three years have been an education and Africa is endlessly fascinating—the continent is big, complex, and diverse. America cannot afford to ignore Africa —America’s future security, and I believe prosperity, depends on a more secure and prosperous Africa,” he said.

U.S. Africa Command is one of seven U.S. Department of Defense geographic combatant commands. The command is responsible for all U.S. military operations, exercises, security cooperation, and conducts crisis response on the African continent in order to advance U.S. interests and promote regional security, stability, and prosperity.