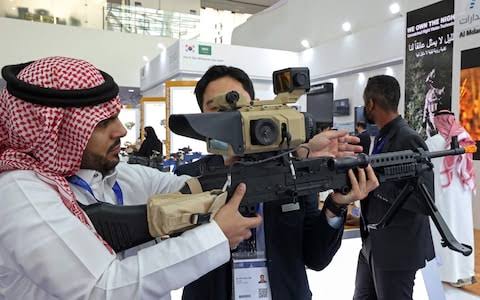 Founded by the General Authority for Military Industries (GAMI) – the Kingdom’s defense industry regulator, enabler, and licensor, hundreds of companies of different sizes and from all levels of the global supply chain were in Riyadh to capture investment and partnership opportunities in the Middle East’s biggest defense market.

Egypt which has been investing huge amounts of money in a wide range of defence industry capabilities was not left out at this year’s World Defense Show. The North African nation appears to be one of the largest gainers in WDS 2022 and has successfully signed several multi-million dollars contracts.

Here’s a summary of some of Cairo’s most significant signings during the week-long defense exhibition.

Egypt’s Minister of Military Production held talks with Hyundai Rotem on cooperation in developing remotely controlled weapons station (RCWS) and the possibility of co-producing the K2 Black Panther Main Battle Tank (MBT) which will be promoted in Egypt under a new special version dubbed K2EGY.

This January, President Moon Jae-in told local media on January 20, that South Korea and Egypt are on the final stage of discussions to co-producing the K2 Black Panther main battle tank in Egypt, and the acquisition of the K9 155mm self-propelled Howitzer from Hanwha Defense.

On the sidelines of the WDS 2022, Egypt’s Minister of Military Production held talks with the representatives of General Dynamics, discussing future cooperation programs in the defense industries field, including upgrading the Egyptian M1A1 MBTs fleet at the Egyptian military factories.

Egypt already produce the M1A1 main battle tank under a Co-production Program joint venture between the governments of the United States and Egypt.

The JV involves a decade-long production run of 1,500 tanks, as well as other kinds of vehicles and serve as a repair depot for Egypt’s fleet of M60 Patton main battle tanks.

Egypt had earlier signed a US$150 million contract with General Dynamics for the construction of the factory in 1984, which was financed using American security assistance funds and portions of Egypt’s annual US$1.3 billion in foreign military financing.

Egypt also announced a new project for a domestic Egyptian “Thebes-30” UAV with a payload of 250kg of recon equipment or armament and endurance of +30 hours.

The project is still under development process by the same group that developed and manufactured the Egyptian June 30 UAV.

Thebes-30 unmanned aircraft was first unveiled at the Egyptian Defence Exhibition in 2021 (EDEX-21), the drone is designed mainly for surveillance missions.

And lastly, Egypt’s Ministry of Military Production signed an agreement with the U.S. Navistar Defense Group to cooperate in localizing the industry of military transport trucks, armored vehicles and its chassis at the Egyptian military factories.