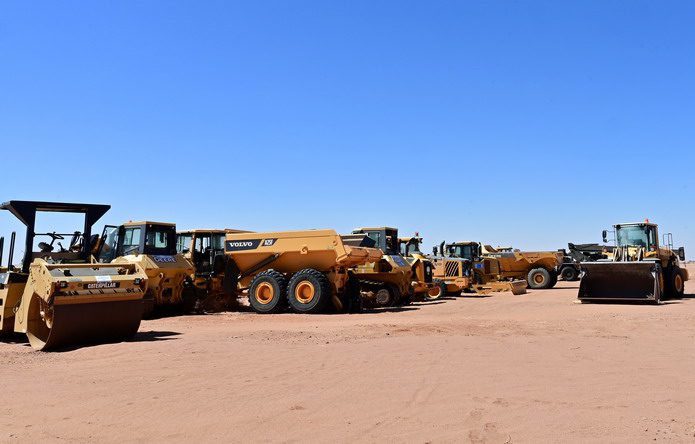 The United States Government has gifted used construction equipment it deemed to expensive to ship back stateside to Nigér.

The US Air Force announced on 28 February that the 724th Expeditionary Air Base Squadron logistic readiness flight (LRF) received approval through the foreign excess personal property (FEPP) programme to transfer approximately 30 vehicles, worth $5.5 million, to the Government of Niger at Nigerien Air Base 201.

The FEPP programme is a process used by the US government to permanently transfer unneeded property to a foreign government. “This process saves taxpayer dollars and also increases partner nation’s defence capabilities,” the US Air Force said.

The transfer of vehicles and equipment between the US and Niger has been a two-year coordination process, and vital in assisting Niger’s Armed Forces in the fight against violent extremism and defend against transnational threats while also alleviating storage limitations for airmen in Africa, the Air Force said.

“This is a win for the United States as we continue to build our partner capacity with our host nation,” said Captain Matthew Reyes, 724th EABS LRF commander. “Another benefit is the installation will free up a large portion of real estate that was being occupied by these vehicles…around 57 000 square feet.”

The transfer consists of a wide-range of construction equipment no longer being used by the US, which will now support Niger-led construction projects both locally and nationally to include a firing range at Nigerien Air Base 101, Niamey, enabling more and better training.

“Most of the vehicles were from the old Red Horse unit that used to be here,” said Senior Airman Keelie Ciaro, LRF fleet management and analysis and FEPP programme lead.

If the assets could not be transferred to the FAN (Forces Armées Nigériennes), the Defense Resource Management System (DRMS) would have assumed responsibility which would have required shipment back to the US.

“The DRMS programme would determine if the vehicles would be repurposed or salvaged,” said Reyes. “The FEPP programme is saving the Air Force money in shipping costs by allowing our host nation to receive these vehicles in country, while allowing us to continue building relationships with our partners.”

“Sending the vehicles would cost more than the worth of the vehicles,” Ruiz added. “Donating them will increase the capabilities of the government of Niger and generate good will between nations.”

During the second half of February, nine vehicles were transferred to Niger’s military. The transfer of vehicles is expected to continue through summer of 2022 while US Airmen and Nigerien soldiers navigate repair, logistics and administrative processes.

“If a vehicle is close to a functioning capability, the FAN will attempt to fix it and drive off with it,” said Reyes. “If no fixes are possible then the FAN will transport them through alternate methods.”

The immense task of validating and coordinating each vehicle is accomplished by two Airmen; Staff Sergeant Jessica Ruiz and Senior Airman Keelie Ciaro.

“SSgt Ruiz and SrA Cairo have dedicated countless off-duty hours to ensure the safe and timely transfer of these assets,” said Reyes. “All while managing their primary duties as AB201’s only Fleet Management and Analysis team!”

“We appreciate the hard work by all involved to make this a reality and hope that it is the model for the future,” said Steven Lord, Chief, Theatre Logistics Branch, HQ USAFE-AFAF/A4RT. “It just makes logistics sense not to spend taxpayer dollars to move equipment for disposal when it can benefit a partner nation.”

“Niger is critical to frontline counter-violent extremism in both the Sahel and Lake Chad Region; as such, the US steadily invests in further building Niger’s counter-terrorism capabilities,” the US Air Force said.