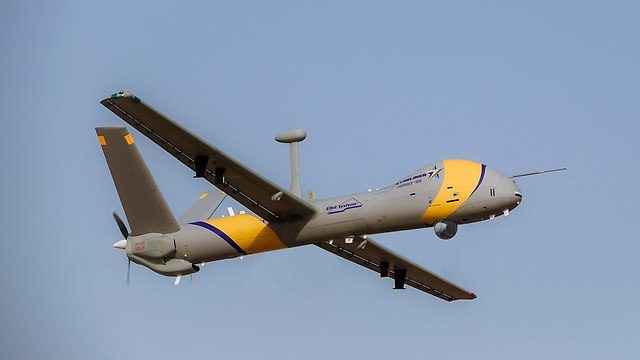 The Hermes 900 drone was seen in a video shared on 24 February by Lieutenant General Muhoozi Kainerugaba, the commander of Uganda’s land forces and the president’s son.

The Hermes 900 MALE drone was part of a two-dozen haul reported to have been supplied in 2019 from Israel.

The Elbit Systems Hermes 900 Kochav (Star) is a medium-size, multi-payload, medium-altitude, long-endurance unmanned aerial vehicle (UAV) designed for tactical missions. It is a successor to the Hermes 450 series of drones, one of the most widely used military drones in the world.

Uganda has bought other UAVs, including several RQ-11Bs from the United States for use in Somalia. It also reportedly placed an order for the Aeronautics Orbiter II UAV in 2011, and AAI Corp Aerosonde VTOL UAV.

Earlier in February 2011, the Israeli firm Aeronautics Defence Systems, was given a contract to supply two Orbiter 2 drones to Uganda. The Orbiter 2 drone has a wingspan of 3metres and an endurance of 3.5 hours.

Uganda’s military operates mostly surveillance drones to monitor its vast borders with Kenya to the east, to the north by South Sudan, to the west by the Democratic Republic of the Congo, to the south-west by Rwanda, and the south by Tanzania.

One RQ-11B Raven was lost in a crash in August 2011, another one crashed in February of that same year.