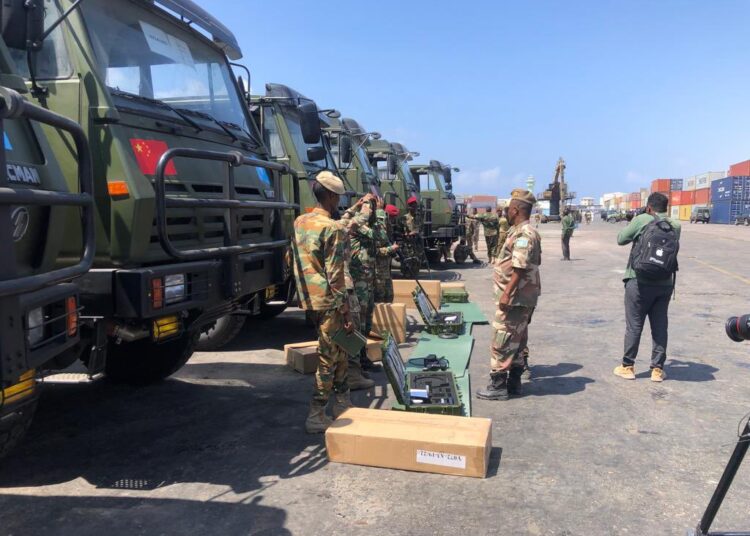 China has gifted several military vehicles and military equipment to the Somali government, to help the country in it’s fight against terrorism.

A shipment of military vehicles including armoured tactical vehicles and trucks arrived in Mogadishu on Friday 18, March 2022 for the Somali National Army (SNA).

Apart from the vehicles, the Chinese Ambassador to Somalia Fei Shengchao handed over ambulances, water trucks, landmine detectors, and other military hardware from China to the country’s Defense minister Abdikadir Mohamed Nur Jama.

The handover Ceremony of Chinese Military Vehicles and Equipment Aid to Somalia was held at the Port of Mogadishu today. Ambassador Fei Shengchao, Minister of Defense Hassan Mohamed, and Chief of SNA Force General Odowaa Yusuf Rageh attended the ceremony.

The total value of this batch of supplies is nearly 5 million US dollars, which includes 5 water wagons, 5 refuellers, 20 Shacman off-road trucks, five DongFeng high mobility field ambulances, twenty-two metal mine detectors, which witnesses once again the development of friendship between China and Somalia.

Ambassador Fei Shengchao said the vehicles and equipment will further enhance the mobility, medical and logistical support capabilities of the SNA, save more lives, and contribute to fighting the drought and meeting the challenges in this country.

The Chinese diplomats noted that the military hardware is “intended to be used by the Somali military in the fight against Al-Shabaab – a terrorist group that operates from the Horn of Africa nation, and which has also been carrying out attacks in the neighboring countries,”

“The vehicles will be used by the Somali National Army and that China and Somalia have a deep relationship, thanking them for their support to the Armed Forces,” Jama said

Friday’s gesture, according to the Somali Minister, demonstrates the “deep relationship,” between the two countries and that Somalia “thanks them (the Chinese) for their support to the local Armed Forces.”

His sentiments were echoed by the Commander of the Armed Forces General Odowa Yusuf Rage who noted that the military support was “delivered to the Somali National Army in a timely manner.” He further indicated that there is other equipment on the way that will be delivered to Mogadishu by Beijing.