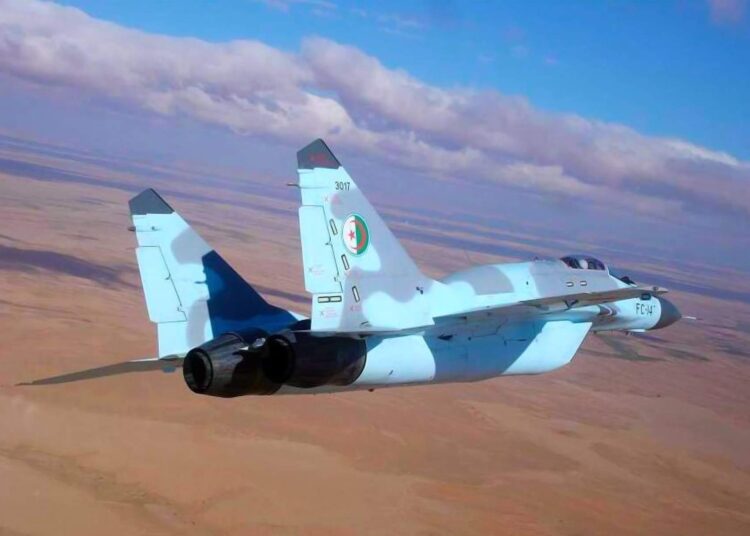 The Algerian Air Force has announced the crash of a MiG-29 ‘Fulcrum’ fighter plane near the air base in Posfer, in the northwestern part of the country, near the city of Oran.

The Algerian Ministry of National Defense confirmed the death of one of the pilots in the accident, which it attributed to a technical malfunction.

The MiG-29 fighter jet crashed immediately after taking off from the Bousfer air base in the second military district.

According to local newspapers, both pilots managed to eject, however, the accident resulted in the death of the pilot Major Ben Mabkhout Al-Taher who succumbed to his injuries at the Military University Regional Hospital in Oran in the second military district.

Said Chanegriha, Chief of Staff of the People’s National Army, has ordered an immediate investigation to find out the causes and circumstances of the accident.

Algeria flies 33 MiG-29S/UB/M/M2 with twelve on order from Russia. Algeria is thought to have ordered 14 jets at the MAKS 2019 air show, comprising of new single seat MiG-29M and dual seat MiG-29M2 in a $2 billion contract.

Bou Sfer air base in Oran is home to the 193e Escadron de Chasse / 3e Escadre de Défense Aérienne which operates the older version of the MiG-29, the MiG-29S and MiG-29UB.

The President of Algeria Abdelmadjid Tebboune, expressed his condolences to the officer’s family in a tweet in which he stated, “Today, Algeria lost one of its hawks, the martyr pilot pilot, Ben Mabkhout Al-Taher, in a heartbreaking accident, after the crash of his plane.

Algeria has been steadily losing some of its frontline fighter jets to crashes over the past few years. In February 2019, an Algerian Air Force Sukhoi Su-24 fighter jet crashed during an overnight training exercise, killing its two crew members.

The Russian-made Sukhoi SU-24 plane went down in an uninhabited farming area in the province of Tiaret, around 250 kilometers (155 miles) southwest of Algiers, the ministry said in a statement.

Likewise, the following year, in January, another fighter jet has crashed on a night training exercise in the east of the North African country killing both of its crew.

The plane “crashed … in an unpopulated area near the village of Ain Zitoun in Oum El Bouaghi district,” the ministry said.