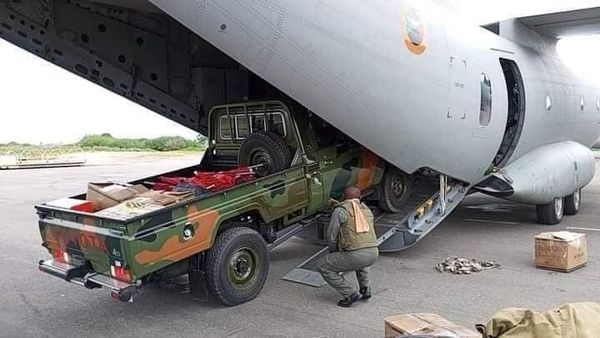 To fulfill the commitment to provide resources towards stabilizing the security situation in Cabo Delgado, Mozambique, the Zambian Air Force (ZAF) has deployed one of its newly acquired C-27J Spartan tactical transport aircraft to Pemba, Mozambique.

The C-27J will help airlift over 50,000 kilograms of cargo for the South African Defence Force from Waterkloof Air Force Base in Pretoria to Mozambique, among other SAMIM assigned tasks.

The President of Zambia Hakainde Hichilema earlier in January committed to providing resources towards stabilizing the security situation in Cabo Delgado, Mozambique, following the SADC Meeting of Heads of State held in January 2022 in Malawi.

President Hichilema noted maintaining peace in neighboring countries is key for the social and economic development of the region.

“During the liberation struggle, Zambia was in a situation to assist other countries and played a pivotal role in the liberation of the region. Zambia hosted a number of liberation movement organisations like the Africa National Congress (ANC) whose Headquarters was in Zambia. We are in a position were we can assist, you cannot enjoy freedom if there is instability in your region, for instability anywhere is instability everywhere,” President Hichilema said.

On 28th January 2022, the Zambia Air Force deployed the C-27J aircraft into PEMBA, Mozambique under the SADC Mission in Mozambique (SAMIM), in support of the peace keeping operation.

In a statement yesterday, Lieutenant General Barry said the deployment of a C-27J aircraft to Pemba for cargo transportation is being undertaken under the Southern African Development Community Mission in Mozambique (SAMIM). SAMIM is a peacekeeping initiative by SADC member states to stabilise the security situation in Mozambique’s Cabo Delgado Province.

Since deployment the ZAF has provided logistical support to other SADC Member States under SAMIM, explained Commander Colin Barry.

In 2015, Zambia ordered two C-27Js from Alenia Aeronautics to complement or replace its aging fleet of BAe 748s, Y-12, and MA60 transport aircraft.

The C-27J Spartan transport aircraft was developed from the G-222/C-27A. For increased range, the C-27J uses the same engines and systems as the Lockheed Martin C-130J Super Hercules.