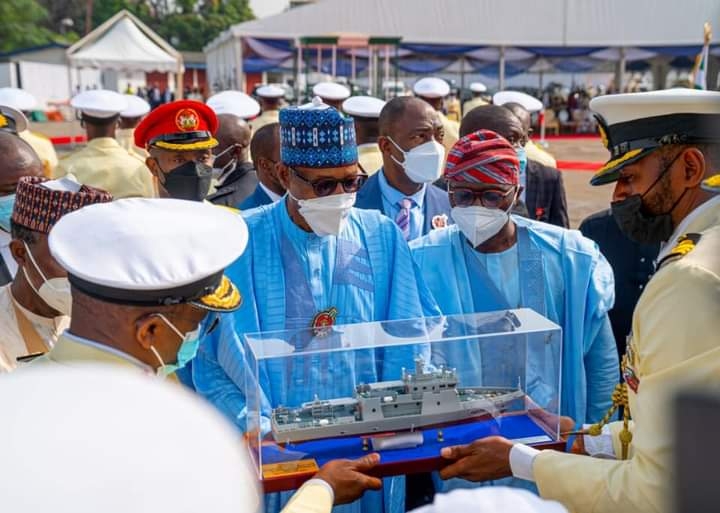 NNS Oji – the name of the third indigenous Seaward Defence Boat or SDB 3 built by the Nigerian Navy engineers at the Naval Dockyard, Victoria Island Lagos was commissioned on 8 December.

President Muhammadu Buhari in Lagos, commissioned NNS Oji (P275) alongside 118 ships and boats, including a helicopter, to enhance the capability of the Nigerian Navy in securing the nation’s maritime domain as well as the Gulf of Guinea.

Speaking at the commissioning ceremony of the Nigerian Navy Ships and keel laying for the construction of Boat-IV and Boat-V, at the Naval dockyard, Buhari, congratulated the Navy under the watch of the Chief of the Naval Staff, Vice Admiral Awwal Gambo, for maintaining a steady course in its drive for local content development.

He said, ” I am delighted to note that one of the ships to be commissioned today, NNS OJI; which is a Seaward Defence Boat, is the third of its series to be locally built at the Naval Dockyard Limited, Lagos, solely by our Navy engineers.

“Given our present high dependence on oil and gas revenues, the Navy is undeniably a major contributor to the economic well-being of our country.

NNS Oji (P275) is the third iteration of the Seaward defence boat series built specifically for operations in the Gulf of Guinea.

The NNS Oji SDB 3 is the largest of the series and meant to be the best judging by size and role which includes patrols towards deep seas.

The Nigerian Navy over the decade has developed expertise and embarked on design/building of ship and craft. With the present class of the Seaward Defence Boat (SDB 3) which is a 43m steel vessel, a shift from aluminium to steel.

Most of her structure are built with steel, generated at Naval Dockyard Limited – a commercial entity of the Nigerian Navy.

A single SDB is built annually, and in May last year, the two halves of the hull of NNS Oji Seaward Defence Boat was brought together and welded to form a complete hull.

NNS Oji (P275) is armed with a 30mm remotely operated naval gun, three 12.7 mm machine guns ( two at each side of the stern, and one behind the bridge). An additional 40mm grenade launcher is optional.

Fitted with modern navigation and communication equipment, and a Simrad radar control station. An RHIB to launch naval boarding parties is carried at the rear of the vessel.