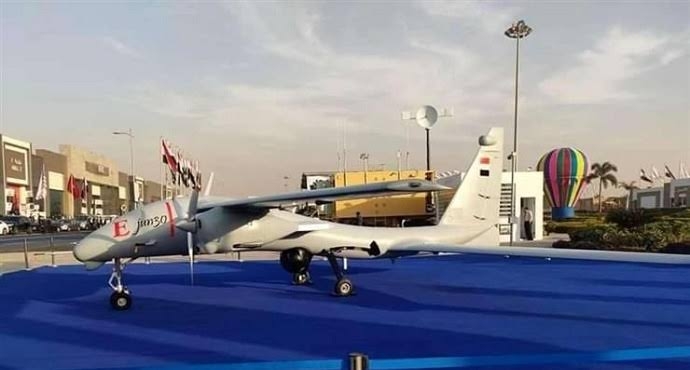 Egypt is presenting for the first time its recently produced drone dubbed “Nut” or “Neuth”, which can carry up to 65 kilograms of weight and hide from satellites. The product is named after the Ancient Egyptian goddess of the sky.

The Nut (Neuth) (pronounced “noot,” named for the ancient Egyptian goddess of the sky) is designed for reconnaissance in both day and nighttime environments and can reportedly carry up to a 50-kilogram payload. It was produced jointly by the Arab Organization for Industrialization and the Military Technical College.

The Neuth drone features a maximum payload capacity of 50 kilograms (110 pounds) and a flying time of up to 10 hours. It also has satellite integration capabilities, making it ideal for strategic reconnaissance missions using electro-optical technologies.

The other drone, EJune-30 SW, is 8.9m-long and is equipped with automated take-off and landing capabilities. It has a 12m wingspan and maximum take-off weight of 1400kg. The EJune-30 SW can reach speeds of 260kph, and 7000m in altitude, with 24 hours of endurance time. This drone is produced by Egypt’s Ministry of Military Production using complex industrial robots.

Produced by the Egyptian Ministry of Military Production, the EJune-30 SW has a reported top speed of 260 kilometers (161 miles) per hour and can fly for up to 24 hours.

Externally, the EJune-30 resembles the Emirati Yabhon United 40 unmanned aerial vehicle. It is highly probable that this is the Egyptian version of the UAV after technology transfer from the UAE to Egypt.

Egypt is also developing Thebes-30 unmanned aircraft for surveillance missions. There was no mockup at the show since the system is still under development. It is being designed to perform intelligence, surveillance and reconnaissance missions.