No additional Thunders for Nigeria 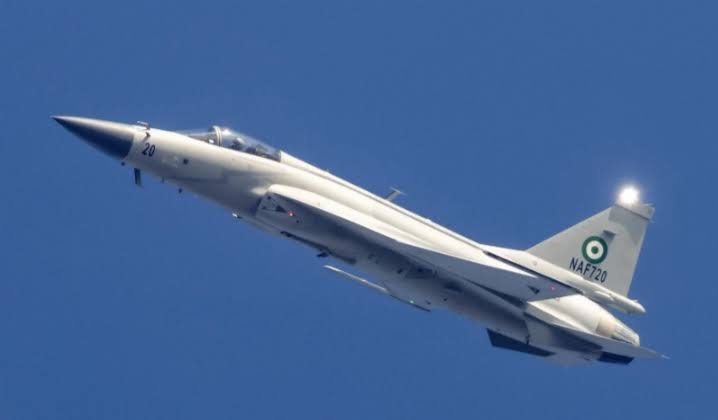 The Nigerian Air Force will have to make do with the three JF-17B Thunder multirole fighter jets it recently inducted as no additional unit will be acquired.

Three JF-17 Thunders have already been delivered and inducted into service since May this year, with serial NAF 720, 721, and 722.

Pakistan Aeronautical Complex (PAC) sales and marketing director, Commodore Moazzam Piracha at the Dubai Airshow 2021 explained to Aviacionline about the status of the JF-17 deal with Nigeria.

Commodore Piracha noted during the Dubai Airshow that there are currently no ongoing negotiations with Nigeria for the acquisition of more Thunder fighters, in addition to the 3 units already contracted.

He also said that PAC hopes and expects that this situation will change at some point while waiting for some sign of interest from the Nigerian government.

Although the Nigerian Air Force (NAF) intends to acquire a couple of additional hardware including surveillance aircraft and helicopters in the proposed 2022 budget, there were no provisions for more JF-17s.

Items listed for the NAF include ongoing and new projects; with the former comprising of; the balance payment for periodic depot maintenance of three L-39ZA and one C-130 aircraft.

The Air Force also listed the balance payment for the procurement of 3 JF-17 Thunders and targeting pods, as well as 2 AW109 Trekker helicopters to replace the existing acquisition of an AW139 helicopter.

The JF-17 Thunder evolved out of the MiG-21 and is a lightweight, single-engine, multi-role combat aircraft developed jointly by the Pakistan Aeronautical Complex and China’s state-owned Chengdu Aircraft Corp.

In September 2016, at the 9th African Aerospace and Defense Exhibition, Nigeria and Pakistan’s Export Promotion Organization (DEPO) signed a memorandum of understanding for the purchase of the JF-17 “Thunder” fighter, making it the first African Air Force to procure the aircraft.

Experts had expected the Nigerian Air Force to buy at least one or two squadrons JF-17 fighter after an initial order for three units is delivered, most likely for trials.

Theoretically, one of the major attributes of the JF-17 for Nigeria is the ease of maintenance, with it’s combination of light airframe with modern manufacturing techniques, and digital electronics should allow for improved readiness than with previous fighter fleets like the F-7N AirGuard.

However, with only three units available, it will be difficult for the NAF to take advantage of these theoretical benefits.

Apparently, the three Thunders will complement the nine existing F-7Ni airguard fighters which are currently being maintained in China.

The acquisition of the JF-17 aircraft is indicative of how the air force has continued to advance its capability and capacity over the past 57 years while developing competencies to safeguard Nigeria’s territorial integrity by air.

The aircraft’s acquisition brought Nigeria and Pakistan relations closer, as Nigeria renames one of Pakistan’s biggest partners in terms of bilateral relations.

The Nigerian military indicated interest to collaborate with the Pakistan Armed Forces (PAF) in the area of defense capabilities to further boost its operations.

Nevertheless, according to Nigerian Defence Minister Bashir Magashi, the Nigerian Air Force’s main operational and security concern remains the militant group Boko Haram in the country’s north, and it is believed the JF-17 will make a considerable impact in addressing the threat.

The JF-17 Thunders will also be supported by twenty-four M-346 Master aircraft from Italian aircraft maker Leonardo recently ordered in a deal is reported to be worth an estimated €1.2 billion and will see the Italian jets replacing the aging Dassault Alpha jet A/E in use by the Nigerian Air Force (NAF).