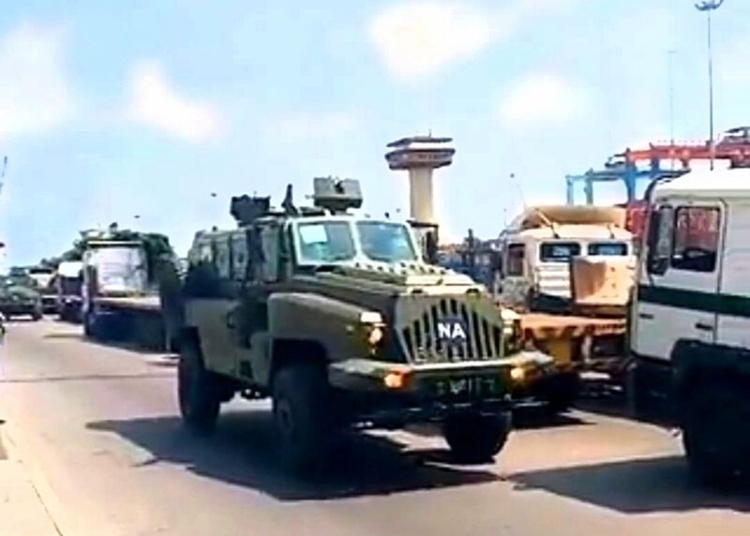 Additional CS/VP3 MRAPs from China’s Poly Technologies have arrived in Nigeria to enhance the country’s ability to meet the terrorism threats posed by the Islamic State and Boko Haram.

At least 50 Bigfoot vehicles were seen being offloaded from a Nigerian seaport, along with another 30 Dongfeng Mengshi 4×4 armoured vehicles. According to videos published on social media, both Chinese vehicles were being transported under their own power and in a convoy to another military base in Lagos.

In March and late September, photos emerged online showing dozens of CS/VP3 vehicles lined up at a factory in China, and painted green with the letters ‘NA’ on their grilles, matching the appearance of CS/VP3s previously delivered to the Nigerian Army.

The Nigerian Army already fields hundreds of Poly Technologies’ CS/VP3 Bigfoot MRAPs since at least 2014, after acquiring an initial 120 of the vehicles. Nigeria had also apparently ordered for an additional batch of the Bigfoot CS/VP3 from China to add to the already large plethora of Chinese military equipment, and paid for by special funds.

The Bigfoot MRAP in Nigeria has somewhat earned a positive reputation for its reliability and troops protection capability against small arms, light weapons and improvised explosives prevalent in the troubled region.

The vehicle can resist a 16 kg TNT blast under each wheel or 8 kg TNT all round. A total of 12 personnel, including the driver and commander, can be carried.

At least more than a dozen CS/VP3 Bigfoot have been reported captured or destroyed by terrorist’s IED in Nigeria since 2015.

The new CS/VP3 Bigfoots will be fielded alongside the Chinese Dongfeng Mengshi (Warrior) CSK131 4×4 armoured vehicles which arrived in Nigeria on Sunday 7, November, as well as with the sixty newly acquired Norinco Type 89 tracked armoured personnel carriers (APC).

The Dongfeng Mengshi order was signed on 15 August 2020 between DongFeng and Poly Technologies, while the Norinco Type-89 tracked vehicles were inducted into the Nigerian Army on Thursday, October 29, at the Army School of Infantry in Jaji, Kaduna State.

All three vehicles will improve the mobility of Nigerian troops through challenging terrain, and will most likely replace the soft skin vehicles currently being used by the military.

The Nigerian Army has so far turned to China to fill the capability gap in its land forces and unmanned domain. Chinese arms suppliers have delivered to Nigeria several new hardware this past few years to help improve the counter-terror operations.

The plethora of hardware from Norinco cost an estimated $152 million in a deal signed in 2019.