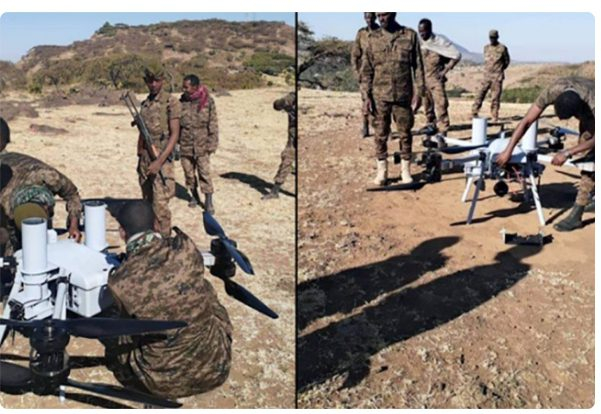 The UAE may have supplied armed UAVs to assist the Ethiopian National Defense Force in the ongoing Tigray War.

Open-source aircraft tracking websites recorded more than 50 cargo flights to Ethiopia in 53 days between August and September 2021. The flights were carried out by an Il-76 cargo aircraft registered in Ukraine and Kyrgyzstan but owned by UAE-based company Fly Sky Airlines. 45 of these flights originated from the UAE.

The same freight carrier had previously been used to deliver equipment to Libya.

Recently, photographs of armed UAVs said to have been taken in the Maychew area of the Tigray region this summer appeared on social media.

The images showed a large vertical rotary-wing VTOL combat UAVs armed with two 120mm mortar bombs. The design of these aircraft is identical to UAVs that were destroyed in Yemen by Houthi forces and operated then by UAE-backed units.

In November 2020, advisors to the Regional President of Tigray accused Ethiopian forces of being assisted by Emirati UAVs located at the UAE airbase in Assab, Eritrea (the airbase was dismantled in February 2021).

In a tweet, Tigray and TPLF leader Getachew Ruda claimed that United Arab Emirates UAVs are supporting Ethiopian forces and Assab city of Eritrea is serving as drone base for UAE.

In response, Chief Commander of the Ethiopian Air Force, Maj. Gen. Yilma Merdas insists that Ethiopia is using its own fleet of drones against TPLF. He subsequently displayed a plethora of both commercial and military grade surveillance drones, with the notable absence of any combat unmanned system.

For a while now, the UAE is known to operate a secretive drone base in Assab airport, in Eritrea to support military operations across the Red Sea in Yemen, and has deployed several Chinese-made Wing Loong I unmanned combat aerial vehicles. In 2015, a Wing Loong drone was spotted at the Assab airbase.

Although Ethiopia is confirmed to be fielding Iranian-made Mohajer-6 unmanned combat system.

At least two UAVs and a GCS were spotted and are most likely for evaluation before making a larger purchase.

In August 1, remains of what appears to be a Qaem precision guided munition was recovered from an alleged drone strike conducted in Tigray.