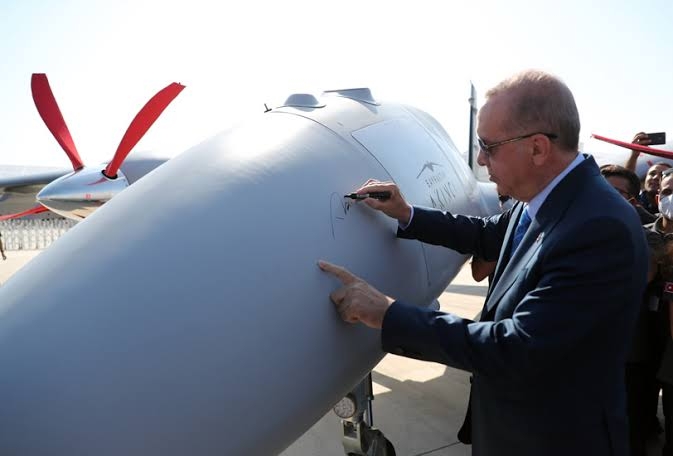 Governor Bello Matawalle of Zamfara State has announced that his state is acquiring armed drones from a Turkish company to aid in the war against terrorism in the state.

Governor Bello made this known during the inauguration of 18 commissioners, 16 special advisers, the Secretary to the State Government, the Head of Service, and three Director-generals on Monday, 11 October.

The Governor noted that his government will not tolerate laxity as it emerges “from the woods,” and that the collaboration with Turkey was finalized during his recent visits to the United States and Turkey.

Apparently, the visit included a meeting with the Turkish-Nigerian Business Congress, as well as with some Nigerian Governors, where they met with more than 20 companies looking to invest in the concerned states.

Without specifying the particular drone, Governor Bello explained that the supply of drones would be “consolidated on October 20 when the Turkish President will visit Nigeria and meet with President Muhammadu Buhari.”

In recent years, Turkey defense industry has produced unmanned aerial vehicles and has increased exports, which have seen success in Syria, Libya, and Nagorno-Karabakh are selling fast and are in demand.

Turkey has become a leading drone manufacturer, along with the US, Israel, and China. Its inexpensive and effective armed drones, especially the Bayraktar TB2 UCAV, have changed the course of conflicts by destroying tanks, armored vehicles, ammunition depots, and air defense systems in several conflict zones across the globe.

Several types of armed drones exist in Turkey; it is not yet certain the type to be acquired by Zamfara state, neither is it certain if the state is allowed by the Nigerian law to operate armed drones.

Experts believe that when acquired, the armed drone will be handed over to the Nigerian Air Force, which has the mandate, legal power, and expertise to operate it.

This is not the first time a Nigerian state decides to acquire drones to combat insecurity, in September 2018, Osun State, a southwestern state in Nigeria announced its plans to deploy Unmanned Aerial Vehicles (UAVs) also known as drones to tackle ethnic violence in the state.

Over the years, Nigeria has ramped up its use of armed drones for counterterrorism and counterinsurgency operations.

Nigeria first acquired five CH-3As from China’s Aerospace Science and Technology Corporation between 2014 and 2015, during the peak of the Boko Haram insurgency, and which became public knowledge when photographs of a crashed aircraft with two AR-1 missiles surfaced in 2016. The CH-3A drone is capable of loitering for hours and firing AR-1 guided missiles or YC-200 guided bombs.

In addition to the CH-3A, two wing Loong II, two CH-3, and four CH-4 have been paid for and are slated for delivery before the end of 2021 to boost surveillance and airstrikes on terror groups in the country.

Several other unmanned systems including Yahbon Flash-20 UAV and Textron Aerosonde AAI VTOL UAV have been procured and a detailed report can be found here.