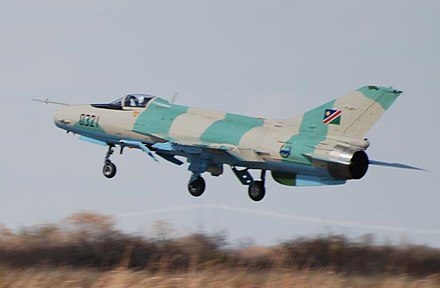 A Namibia Defence Force (NDF) F-7NM fighter jet crashed and is badly damaged in a runway excursion at Ondangwa’s Andimba Toivo Ya Toivo Airport on 15 October.

The F-7NM crashed into a security fence at the end of the runway at Ondangwa Airport. The pilot was injured, and is receiving treatment at Ondangwa State Hospital, police say.

According to the Chief of the Namibia Defence Force, Air Marshal Martin Pinehas, the F-7 had landed normally but its brake parachute failed to deploy, causing it to overshoot the runway. As Ondangwa is now a commercial airport, it does not have arresting systems.

Photographs of the downed aircraft shows it upside down at the end of the runway, and badly damaged. It is most likely damaged beyond repair.

An investigation into the incident will be conducted by the Air Force says the Air Chief.

The Namibian Air Force lost another aircraft in a separate accident in late September, when an NDF Hongdu K-8 (JL-8) jet trainer crashed shortly after takeoff from Karibib Air Force base.

Both pilots ejected and one was injured, suffering multiple fractures.
The accident was caused by an ejection seat mechanism which was accidentally initiated resulting in both pilots being ejected out of the aircraft