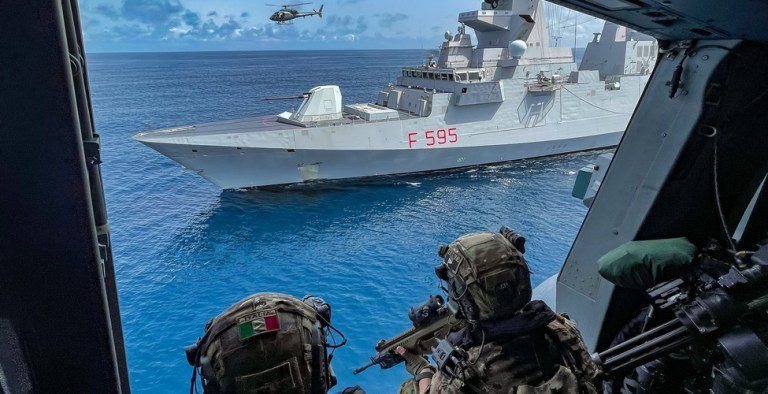 The Italian Navy intends to continue its role of protecting the safety of navigation on the high seas and the fight against illegal trafficking, despite the covid-19 pandemic.

The Italian Navy committed two high-end Carlo Bergamini-class frigates (which are variants of the FREMM multipurpose frigate) to engage piracy in the Gulf of Guinea.

On Thursday 11 March, after concluding training activities with the USS Hershel “Woody” Williams, aimed at supporting interoperability between the Italian and the U.S. Navy, Italian Navy FREMM class frigate ‘ITS Luigi Rizzo’  (F 595) sailed towards the Gulf of Guinea, where it assisted in combating piracy.

In the training, U.S. Navy Special forces simulated being a suspected merchant, and interrogations were conducted via radio along with a series of close kinematic maneuvers.

Then after, the Italian Navy frigate ‘ITS Luigi Rizzo‘  (F 595) sent its boarding team to carry out an inspection on the suspect vessel. The insertion was conducted with two fast interceptor boats under the protection of two SH-90 helicopters.

ITS Luigi Rizzo continued patrol of the Gulf of Guinea till June when it was required to move back to its home port in La Spezia. During her tour, she assisted in screening merchant shipping, and escorted vessels in international waters.

She’s is now being replaced by another Carlo Bergamini-class frigates ‘Antonio Marceglia’ (F 597).

FFGH Antonio Marceglia (F 597) is currently en route to the Gulf of Guinea under Operation Gabinia, an Italian anti-piracy mission.