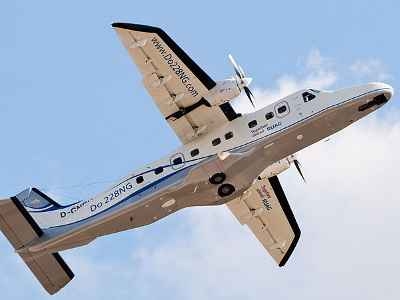 The Indian Navy has transferred a Hindustan Aeronautics Limited (HAL) Dornier 228 turboprop aircraft to the Mauritius Coast Guard, the maritime branch of the police.

The Indian Ministry of Defence (MoD) announced on 14 September that the aircraft (MSN 4059) was handed over to the Maritime Air Squadron of the National Coast Guard on 13 September.

The passenger variant Do 228 aircraft was given as a loan unit pending the delivery of another new Dornier 228 signed under a contract with HAL to support the current increased load of air operations, says the High Commissioner of India to Mauritius, Nandini K Singla.

The new aircraft will be the service’s fourth aircraft of the type in its fleet, and will be delivered next year.

“As you may know, Mauritius is procuring a new passenger variant Dornier aircraft under a USD100 million dollar line of credit extended by India. And this aircraft today has been provided by India on a gratis basis till such time the new aircraft lands here in Mauritius,” said Singla.

“We do not want Mauritius to wait till the new commercially procured aircraft arrives and I’m very happy that we were able to do this within six months of signing the letter of exchange in February 2021,” Singla added in reference to the contract.

These moves by the Indian government aims to counter China’s rapidly growing influence in Africa.

To project military power in the region, India is constructing a large military air and naval base on North Agalega island 1,100 km North of Mauritius capable of handling P-8I maritime patrol aircraft, while it’s two jetties can berth capital warships.

The Mauritius Coast Guard Maritime Air Squadron (MAS) possess three Do-228s (MP-CG-4) which was purpose-built for the MAS by HAL and entered service in 2016.