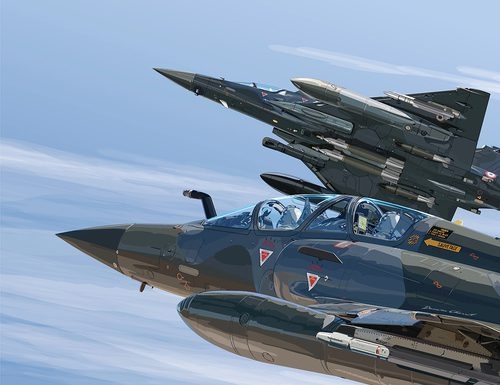 A pair of French Mirage 2000D RMV aircraft have been tested in Djibouti, to deploy them on operational missions from Niger in 2022.

The Mirage 2000D aircraft have been upgraded to the MLU standard with the designation RMV.

The two upgraded aircraft were deployed from July 1 through 20 at the Base Aérienne (Air Base) 188 Djibouti with the Escadron de Chasse et d’Expérimentation (Fighter and Experimental Squadron) 1/30 “Côte d’Argent”.

The evaluation unit in the French defense procurement agency DGA was also involved in the tests.

The 20-day-long testing allowed the French Military Air Expertise Center (CEAM) to carry out measurements of the Mirage 2000D RMV in realistic conditions, while the Directorate General of Flight Test Armaments (DGA EV) carried out tests for the new CC422 cannon pod.

The joint evaluation test brought together personnel from the CEAM, the aeronautical technical support squadron (ESTA), the operational information systems and cyber defense squadron (ESIOC), and the DGA EV.

During their stay, the evaluation team relied on the support of the French Forces stationed in Djibouti (FFDJ).

The Mirage 2000D carried out various missions in Djibouti airspace in coordination with the Mirage 2000-5 of the EC 3/11 “Corsica” and the forward controllers of the 5 th overseas combined arms regiment (5 th RIAOM), testing in demanding climatic conditions the entire ecosystem of the Mirage 2000D RMV including support systems, mission planning, and debriefing systems.

The Mirage 2000D RMV is a vastly upgraded variant featuring more modern avionics, a gun pod (as the Mirage 2000D is not equipped with an internal gun), new weapons, and sensors.