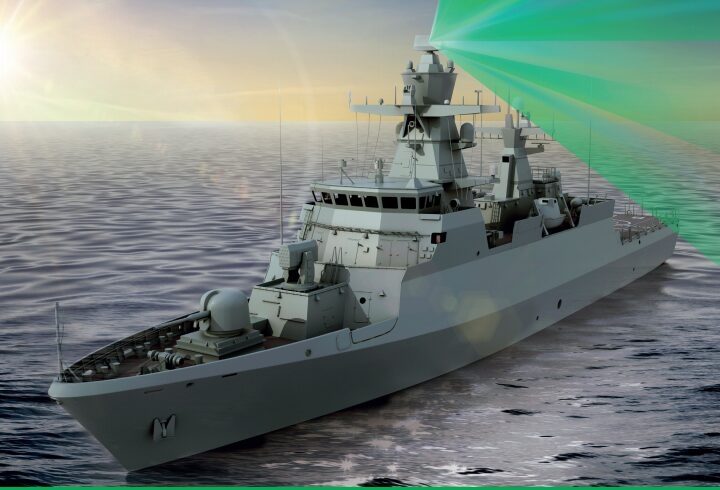 The new AESA radar system was launched at Hensoldts’ main office in Irene, after it was initially announced on 15 September at the Defence Service Exhibition International (DSEI) in London, UK.

The 22 September unveiling was attended by the SANDF leadership including the Chief of the Navy Vice Admiral Mosiwa Hlongwane. Egyptian attaché and Executive Director of the Aerospace, Maritime, and Defence Industries Association of South Africa (AMD) Sandile Ndlovu were also present at the launch.

As a multi-mode radar, Quadome can switch between surveillance and self-defense modes depending on mission necessity, simplify operator interaction and reduce operator workload.

According to Hensoldt, the surveillance mode is used for general surface, and air surveillance, while the self-defense mode is for high-threat situations and target engagement, both modes feature a helicopter support function. Although, the self-defense features a separate gunfire support (GFS) function which can track up to three surface targets designated for tracking by the operator and uses B-Scope-Video.

For specific details, the Quadome has a gallium nitride solid-state transmitter with a continuous 360-degree rotation. Its update rate is either four seconds in surveillance mode or two seconds in self-defense mode. It has an AESA stacked beam with electronic stabilization with elevation coverage up to 70 degrees. It has a range from 100 meters to 200 km and can process more than a thousand air and surface targets.

Furthermore, Quadome radar can automatically detect countermeasures such as jammers and can deploy counter-countermeasures even in rough sea conditions up to sea state five.

Operating in C-band, the Quadome is a medium-PRF (pulse repetition frequency) pulsed doppler radar. Programme Manager of Hensoldt South Africa’s radar business unit, Jaco Botha, said, “We have specifically selected medium-PRF so that you can easily discriminate targets from the background clutter.” The radar also has an integrated Identification Friend or Foe (IFF) antenna. The software-defined radar has a configurable, flexible, and upgradeable system. The Quadome’s high tracking accuracy is compatible with surface-to-air missiles (SAM) to support effective air defence operations, Hensoldt said.

Hensoldt acquisition of Tellumat positioned the company as one of the largest defence radar development programmes in South Africa.