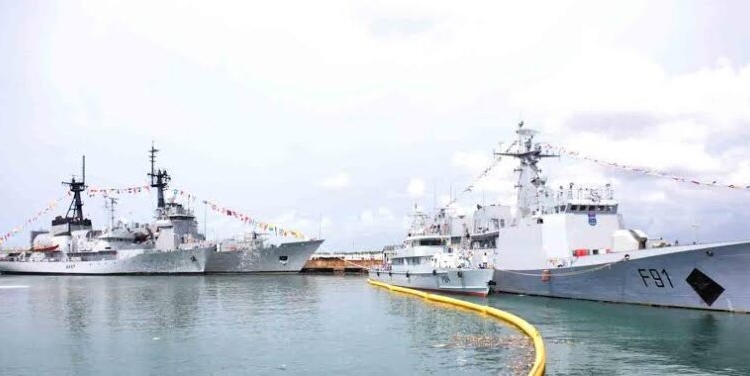 According to remarks by the Chief of the Naval Staff (CNS) Vice Admiral AZ Gambo at the dinner in honour of the Nigerian Navy graduates of the National Decence College course 29 on 15 August 2021.

The CNS explained that the event provides an opportunity to present his policy direction, and noting that “… the volatile, uncertain, complex and ambiguous nature of contemporary national security challenges presupposes the need to aggregate the imperatives of the Whole-of-Government and Whole-of-Society approaches to meet national security concerns.”

“Accordingly, the NN is leveraging on a robust collaborative strategic engagement with relevant government agencies and non-governmental stakeholders.”

“Worthy of note” the CNS added “is the support from Mr President and Commander-in-Chief. Specifically, Mr President has shown tremendous support for our fleet recapitalization effort. Recall, the recent acquisition of NNS LANA, another contract has been awarded for a sister ship to NNS LANA which is the 35m Hydrographic Survey Ship. Also, construction work is ongoing on the LST-100 and we have just received yet another approval for the acquisition of 2 x OPVs.”

It is uncertain if the NN will still proceed with the procurement of a general-purpose frigate to replace the former naval flagship Nigerian Navy Ship NNS ARADU.

In mid-2009, the Nigerian Navy presented its plans for its strategic goal in the short, medium and long term.

With these two new OPVs now in the pipeline, the NN’s short-to-medium term requirements have been thoroughly met.

It is not yet certain at this time which particular OPV the NN might opt for, however, during the bidding process for the 100-meters Landing Ship Tank (LST), both Turkish and Indian companies lost to UAE’s Damen after a competitive process, likely due to the cost advantage of the UAE company.