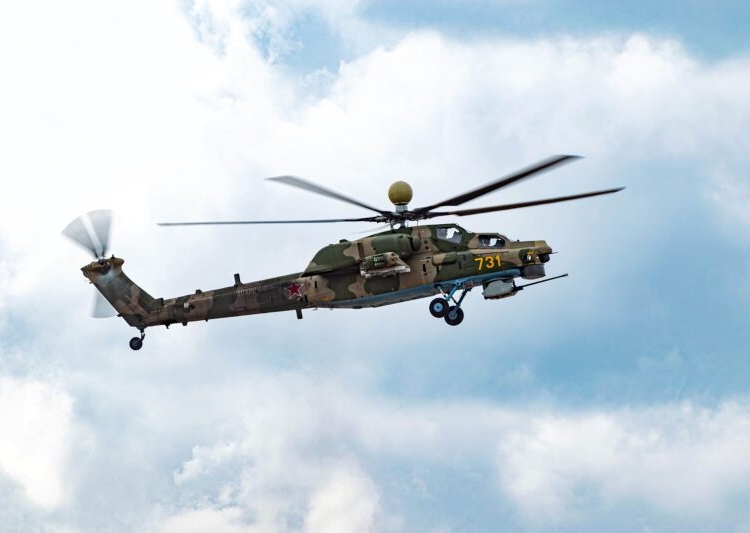 The Russian Air Force’s Berkuts, operating the Mi-28N Havock gunship helicopters, aerobatic performance demonstrator team has demonstrated its mastership at the MAKS 2021 airshow which took place late in July near Moscow. The performance was one of the most recognizable events of the show.

Mi-28N (NE – export designation) Night Hunter, serially produced by the Russian Helicopters’ Rostvertol, is especially designed to endure extremely hot temperatures and remain operable in any geographical and climatic conditions, day and night (through the use of a day/night surveillance sighting system and an on-board radar), and in adverse weather conditions, all the while having extraordinary combat survivability systems for helicopter and crew. These include a self-defense system against heat seeker missiles, armour protection for cockpit, vital systems and components. The fuel tanks have special protection, and at the same time provide for a long flight with significant weapons load.

The powerful Klimov VK-2500 turboshaft engines enable the gunship perform single-engine flights and landings in case of emergency. The special filters provide anti-dust protection which is especially important for the countries of Africa and Middle East.

The other advantages are said to be the precision engagement capability against small ground and low-speed air targets, capability of basing on ground sites located at altitudes of up to 4 000 m, and most of all the impressive armament suite, which includes up to 16 Ataka-type guided anti-tank missiles, up to 4 Igla air-to-air guided missiles, up to 80 S-8 80mm unguided rockets and an integral flexible mount with 30 mm 2A42 gun mounted under the nose; 23mm gun pods; 80 mm and 122 mm unguided rockets.

Officially in service with the Russian Armed Forces, the Night Hunter has been extensively used in Syria. Major Evgeny Seelev, Russian Aerospace Forces flight commander, while describing his Syrian experience in an interview with The Red Star newspaper specifically emphasized the night vision of the helicopter.

“You can see a car at a distance of 15 km. Thermal imagers, special glasses – all of this is used to detect targets in the dark and gives good results. The characteristics of the Mi-28’s weapons also allow a lot, this helicopter sees and shoots further. The ergonomics of the cockpit are better thought out, that is, the crew is comfortable here, and this is also important”, – said the pilot.

The basic range of the Mi-28NE is 450 kilometers, but fitted with external fuel tanks this may be extended to 1 100 kilometers. The gunship also features a low altitude collision avoidance system, state-of-the-art avionics and a sophisticated weapon control system. The armoured cockpit protects the crew from enemy fire and absorbs the impact energy during emergency. The blades of the Mi-28NE main rotor are made of composite materials, and a flight can still be completed even if they are hit by 20-30 mm artillery shells.

The Russian media also reported, that the Mi-28NE helicopter can interact with drones and operate them remotely.

Rosoboronexport continues to demonstrate key leadership in the defense market

As a leader in the international defense market, Rosoboronexport has over the past two decades achieved strong results in promoting products manufactured by domestic enterprises, including those affiliated to Rostec. Its key financial indicators – the order book and the value of deliveries – have increased fivefold since 2000. Over the years, Rosoboronexport has signed more than 26,000 contracts with partners and delivered over $180 billion worth of products to 122 countries around the world.

Foreign customers appreciate Rosoboronexport competencies and the opportunity to cooperate with Russia’s defense industry through the company as a unique one-stop shop offering a full package of services for the export of high-tech military and civilian products and technology transfer.

More so, Over 1,000 Russian helicopters of different versions have been delivered abroad under Rosoboronexport contracts for almost 20 years.

In 20 to 22 May 2021, Rosoboronexport JSC invited representatives of different levels from more than 50 countries to the 14th International Helicopter Industry Exhibition (HeliRussia 2021), which was held at the Crocus Expo International Exhibition Center in Moscow.