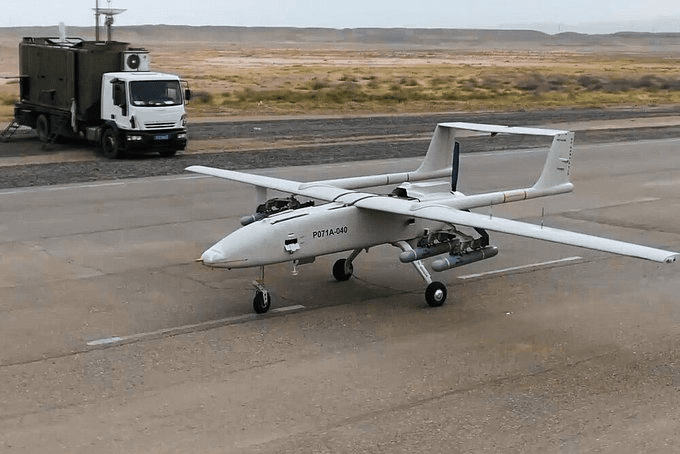 Prime Minister Abiy Ahmed could be seen with a GCS during he’s visit to the Semara airbase some days later.

A violent civil war in the northern Tigray region has thrown the nation into turmoil, the Tigray People’s Liberation Front (TPLF) has been making steady gains since earlier this year.

It is not yet certain the number of the Mohajer-6 drones was acquired by Ethiopia, however, at least two UAVs and a GCS we’re spotted and are most likely for evaluation before making a larger purchase.

In August 1, remains of what appears to be a Qaem precision guided munition was recovered from an alleged drone strike conducted in Tigray.

The Ethiopian military drone fleet consists almost entirely of Israeli systems like the Aerostar UAS and WanderB mini-UAS, as well as a plethora of commercial-grade Chinese drones.

To be clear, the United Arab Emirates are conducting drone strikes against Tigray with its Wing Loong II UCAVs stationed in Eritrea.

The UAE is known to operate a clandestine drone base in Assab airport, in Eritrea to support military operations across the Red Sea in Yemen, and has deployed several Wing Loong II unmanned combat aerial vehicles it acquired from China.

The new Mohajer-6 drones will enhance the Ethiopian National Defence Force capabilities, considering that the Mohajer-6 can be armed with various missiles and bombs including the Iranian-made Qaem air-to-surface missile.

Although largely unproven in combat, the Mohajer-6 has an operational range of 200 km, 12-hour endurance, and a 40 kg payload of two to four Qaem air-to-surface missiles.

It is fitted with an EOAS-I-18A forward-looking infrared (FLIR) turret.

In Africa, the Mohajer series drones have been successfully exported to Sudan and Libya. Although the Libyan National Army version is the Mohajer-2 and is mostly used for Intelligence, Surveillance and Reconnaissance (ISR)  artillery spotting.