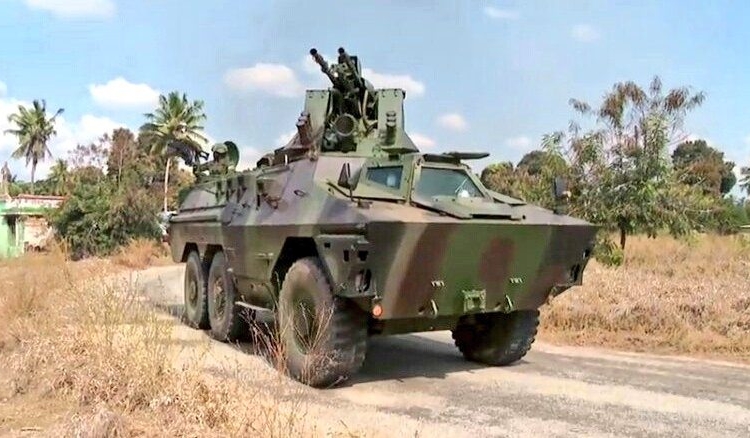 Photographs published on social media by the Rwandan Army shows a modified South African-made Ratel infantry fighting vehicle fitted with the BAU-23X2 RWS in the frontlines.

In one of the photograph, troops advancing to the last strongholds of Islamist insurgents mocimboa da Praia city were operating beside the Ratel vehicle and a UAE-made Isotrex Phantom II APC.

Rwanda is known to have procured 35 second-hand Ratel infantry fighting infantry vehicles from South Africa in 2007, of which 15 were Ratel 90’s and the rest Ratel 60’s.

Regarding the BAU-23X2 RCWS, it was manufactured by Kharkiv Morozov Machine Building Design Bureau (KMDB).

The remote weapon station is designed for firing against human and armoured targets both on the ground and in the air.

Further protection is provided by six smoke screening system, consisting of six 81-mm smoke grenade launchers, three at each side of the module.

For the offensive in Cabo Delgado, the Rwandan Army is also employing the UAE-made Isotrex Phantom II APC’s which have not been reported to be in it’s inventory.

For it’s part, Rwanda has deployed a 1,000-strong force to Mozambique to help it combat an escalating Islamic State-linked insurgency.

Rwandan soldiers in the forward sector of the battlefield eliminated 14 insurgents in Mozambique in fighting last week, however, a Rwandan soldier had sustained a minor injury.