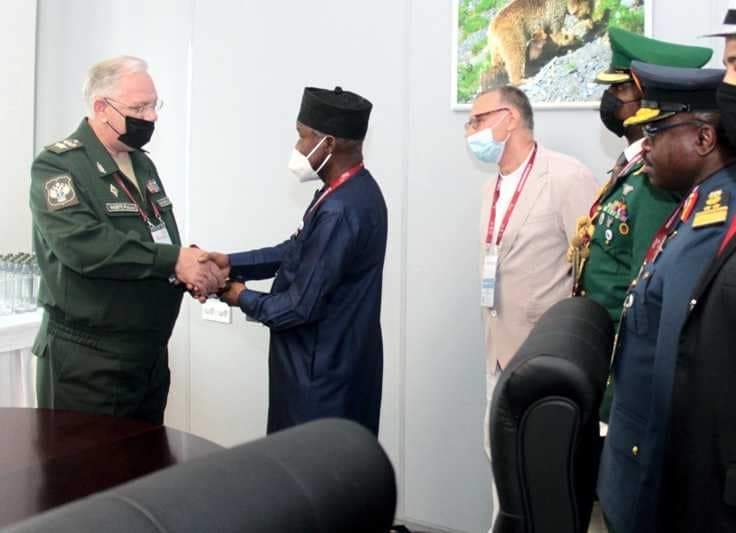 Nigeria has signed a Military-Technical Cooperation Agreement with the Russian Federation. The Honourable Minister of Defence, Major General Bashir Salihi MAGASHI (Rtd), who is on an official visit to Russia, signed on behalf of the Federal Republic of Nigeria, while the Director of the Federal Service for Military-Technical Cooperation, Dmitry Shugaev, signed for the Russian Federation.

The signing ceremony, which took place on 23 August 2021, was witnessed by the Nigerian Ambassador to the Russian Federation, His Excellency (Prof.) Abdullahi Y. SHEHU, the Chief of the Naval Staff, Vice Admiral Auwal Zubairu GAMBO, the Defence Attache in the Embassy of Nigeria in Moscow, Air Vice Marshal Olatokunbo ADESANYA, representatives of the Nigerian Army and the Nigerian Air Force, other senior Military officers, and officials of the Nigerian Ministry of Defence. This Agreement terminates the earlier Agreement between the two countries signed on 6 March 2001.

In a brief statement after the signing ceremony, Ambassador SHEHU expressed appreciation to the Russian authorities and reiterated that Nigeria is not looking for alternative but for complementarity and mutual benefits.

In a related development, declaring open the 7th International Military- Technical Forum –Army 2021 on 23 August 2021, President Vladimir PUTIN of Russia stated that “Massive mutually beneficial portfolios of contracts for the supply of Russian military goods are concluded on the forum’s sidelines every year”.

According to President PUTIN, “The forum has on display over 28,000 units of modern military arms and equipment ranging from small firearms to artillery, tanks, and military combat aircraft. Our army and navy are being modernised at a fast pace as they receive the latest­ generation military assets. For example, the share of modern weapons.

The Agreement on Military-Technical Cooperation between both countries provides a legal framework for the supply of military equipment, provision of after sales services, training of personnel in respective educational establishments and technology transfer, among others. The signing of the Military-Technical Cooperation Agreement is a landmark development in the bilateral relations between Nigeria and the Russian Federation.