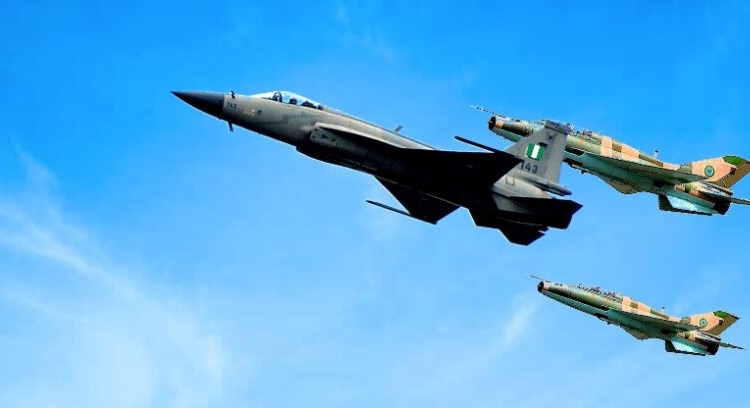 *Image above for illustrative purposes*

Nigeria’s JF-17 Thunders recently concluded an Air Defence Exercise to improve cooperation and air communications between allied units. The exercise helps promote the Air Force’s air-land integration in order to demonstrate its capabilities and readiness to protect the country.

The air defense drills involves fighters simulated attacks against allied infrastructure, with the JF-17s training against these attacks. Also, the Thunders responded to the threat in a joint manner with the F-7Ni airguard fighters. Subsequently, the JF-17s and F-7Ni fighters conduct air-to-air combat drills.

According to informed sources, these types of exercise shows how Nigeria can use multiple types of fighters and ground-based assets in a multi-domain environment to defend the country.

This, the source explains can “further develop our operational tactics and refine our airspace coordination with the national forces.”

The recent training drills highlights the Nigerian Air Force’s commitment to collective defence and to maintain peace and preserve security in the region.

However, it is not yet clear which type of aircraft undertook the aggressor’s role in the exercise.

The acquisition of the JF-17 aircraft was indicative of how the air force has continued to advance its capability and capacity over the past 57 years while developing competencies to achieve its constitutional mandate of defending the nation’s territorial integrity by air.

Last week, the Nigerian Air Force announced that it was now arming and using its indigenous air-to-ground rocket systems against ground targets in combat. It is not yet clear if the announcement is related to the recent Air Defence Exercise.

The Nigerian military and political leadership have expressed “complete satisfaction” over the performance of the three JF-17 thunder fighter jets that it bought from Pakistan in May 2021.

The JF-17 aircraft, with its unique fighting capabilities, would prove to be a potent platform in addressing the security requirements of Nigeria,” the Inter-Services Public Relations agency (ISPR) said in a statement, quoting Pakistan’s Chairman Joint Chiefs of Staff Committee (CJCSC), General Nadeem Raza, after his meeting with Nigerian President Muhammadu Buhari.

The CJCSC who is reportedly on an official visit to Nigeria, held separate meetings with a group of other officials to discuss, “matters of bilateral and military cooperation (between Nigeria and Pakistan) including security, counter-terrorism, and prevailing regional environment.”

According to the statement, “Nigerian President thanked Pakistan and its armed forces for their consistent support to Nigeria in its war against terrorism”.

The CJCSC also reiterated that Pakistan is keen to expand its existing bilateral military to military cooperation with Nigeria.

The three fighter jets were handed over to Nigeria on 20th May 2021, on the 57th anniversary of (Nigerian Air Force) NAF, following a $184 million sale contract between two countries.

The fighters were handed over by Pakistan Aeronautical Complex Kamra, which constructed the aircraft and was responsible for their delivery.

Nigerian Defence Minister Bashir Magashi, on the occasion, thanked Pakistan and its Air Force for their role in modernizing the local service and helping Nigeria meet its security challenges.

We are happy and excited about the addition of JF-17 fighter aircraft from Pakistan,” he said. The Nigerian Air Force’s main operational and security concern remains the militant group Boko Haram in the country’s north, and it is believed the JF-17 will make a considerable impact in addressing the threat.