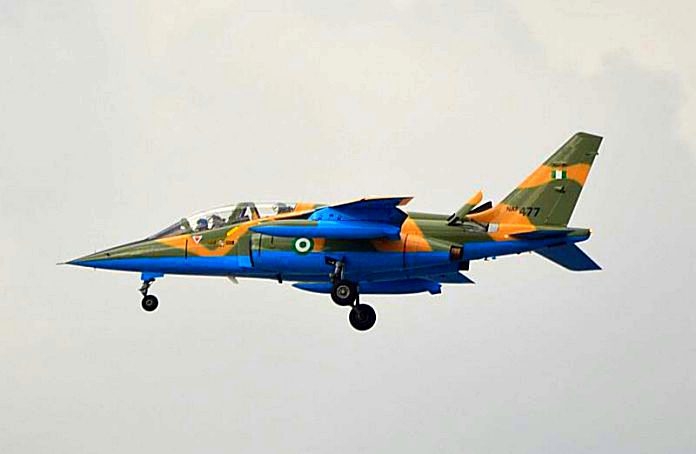 A Dassault Alpha Jet of the Nigerian Air Force (NAF) succumbed to intense ground fire from non-state actors on Sunday, 18 July after completing an air interdiction mission between the boundaries of Zamfara and Kaduna State in Nigeria’s middle belt region.

According to an Air Force statement, the pilot of the aircraft, Flight Lieutenant Abayomi Dairo, “successfully ejected from the aircraft. Using his survival instincts, the pilot, who came under intense ground fire from the bandits, was able to evade them and sought refuge in nearby settlements awaiting sunset. Using the cover of darkness and his phone set for navigation.”

“Flight Lieutenant Dairo was able to elude several bandits’ strongholds and maneuvered his way to a Nigerian Army Unit, where he was finally rescued.”

Immediately after the crash, the Chief of Air Staff, Air Marshal Oladayo Amao, directed the NAF Intelligence, Surveillance, and Reconnaissance (ISR) platforms to locate the crash site, while helicopter gunships were tasked to provide close air support to NAF Special Forces (known as the Panthers) and Nigerian Army troops deployed to secure the crash vicinity.

This latest Alpha jet shoot down, follows a string crashes suffered by the NAF in recent times. On 31 March, an Alpha jet was lost during counter-terror operations likely as a result of mechanical failure however, the crash was quite controversial as Boko Haram claim to have shot it down turned out to be false.

At that time, Boko Haram published on Social media a heavily doctored video of a separate incident which occurred in Syria around 2014 for propaganda purposes.

This, is to boost the Air Power employment capability against insurgency and other security challenges.

Reports that the Nigerian Air Force was In discussion with Leonardo for for 24 M-346 FA to replace the venerable Alpha jet A/E that are reaching the end of their service life was also untrue.

The Alpha jets alongside F-7Ni AirGuard and Mi-24/35 Hind gunships have been the pointy tip of the Air Forces’ offensive strategy against terrorism, secessionist and banditry in the country.

In February, a Nigerian Air Force Beechcraft King Air B350 aircraft (NAF 201) aircraft crashed while returning to the Nnamdi Azikiwe International, Abuja from Minna Airport after reporting engine failure, killing the six persons on board, including two crew. Nigeria’s Chief of Army Staff, Ibrahim Attahiru, was killed in the accident.

While in July 2017, another AgustaWestland AW 109 helicopter was forced down on a body of water by the crew after it developed a technical glitch.